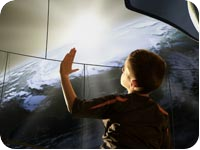 Reason #2: The agenda for the 25th National Space Symposium doesn’t just read like the Who’s Who of the space industry, it is the Who’s Who. The agenda is jam-packed past, present and future space leaders.

This wide representation of national security, research and development, manufacturing, private and personal spaceflight and space administration clearly indicates that The Next Space Age has begun.

For information about Featured Panels, see “Top 5 Reasons to Attend the 25th National Space Symposium – Inspired Agenda” in this edition of Space Watch. For more details, go to www.NationalSpaceSymposium.org.