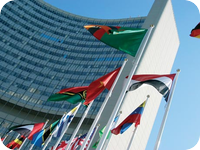 Established as a permanent committee in 1959 with just 24 members, COPUOS has since grown to 69 members – one of the largest committees in the United Nations. In addition to Member States, a number of international organizations, including both intergovernmental and non-governmental organizations, have observer status with COPUOS and its subcommittees.

Agenda items at the meeting included: space debris, spin-off benefits of space technology; space and society with the special theme of space and education; space and climate change; international cooperation in promoting the use of space-derived geospatial data for sustainable development; and space and water. Preliminary discussions of a framework for a United Nations Space Policy were also considered. The committee heard reports of the meetings Scientific and Technical Subcommittee and Legal Subcommittee held earlier this year.

Technical and special presentations on a variety of subjects were conducted during the meeting. Of note was the participation and presentation by Brig Gen. Susan Helms, director of plans and policy, United States Strategic Command, regarding February’s collision of the Iridium 33 and Cosmos 2251 satellites. China’s Shenzhou 7 Taikonauts presented to the committee as part of the opening exchange of views.

The Space Foundation took part in a number of off-agenda items, including a special presentation regarding space exploration organized by the University of Vienna Legal Department and featuring presentations by India, Japan, China, the European Space Agency, the United States, the European Space Policy Institute and UN Office of Outer Space Affairs, and a meeting with the Deputy Permanent Representative of the United States Mission in Vienna. Additional meetings were conducted with leadership of the Space Generation Advisory Council and Secure World Foundation regarding future cooperative initiatives.

The Space Foundation joined the U.S. State Department in co-hosting the United States Reception for more than 100 committee delegates and staff members of the Office of Outer Space Affairs.