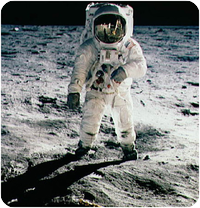 As the 40th anniversary of the Apollo 11 mission approaches, the Space Foundation wants to know where you were and what you were thinking on the historic evening of July 20, 1969, when Neil Armstrong placed the first human footprint in the Lunar Dust (and took this historic picture of Buzz Aldrin, while Michael Collins piloted the Command Module above).

Watch your e-mail box for a request to send us your memories and your thoughts.

And, since we know that most of the population alive today wasn’t around in 1969, we’d like to hear what your parents or grandparents told you about their thoughts, too.

Follow us on Twitter (SpaceFoundation) this month as we reminisce about what we consider one of the greatest moments in the history of humankind.

Here’s what some of our friends told us:

As Apollo 11 approached the moon, my father, an Air Force pilot, was on his way to Viet Nam for a one-year tour of duty. We were living in Austin, Texas, dreading Dad’s departure, but the Apollo 11 mission provided my brothers, sisters and me with a powerful –  if temporary – diversion. In fact, you could say our collective fascination with aviation transformed into a family obsession with space flight. I always wondered why Buzz Aldrin didn’t go first. Years later, I realized that he was the lunar module commander, so it was his job to ensure the ship’s safety so that Armstrong could step out first. Everyone remembers who’s first; but it takes a huge person to accept the role of No. 2. I got goosebumps not when Armstrong and Aldrin stepped on the moon, but when they stepped out of the capsule after a successful splashdown. I knew that if they could come home safely from the moon, then so could my Dad from Viet Nam. – Charley, American Airlines, DFW Airport, Texas

I watched the moon landing at my aunt and uncle’s farm in rural Augusta County, Va. A large antenna on the roof captured the signal from Harrisonburg, the nearest town with a TV station, about 15 miles away. My father’s extended family crowded around the grainy black and white image in a small living room where, night and day, a police scanner constantly crackled in the background (a rural source of entertainment and breaking news). The house had no running water and was heated by woodstoves. My relatives acknowledged the event as they might react to an election in a foreign country, it happened, but had little relevance in their lives – it didn’t impact the weather, the market price of eggs, or demand for milk. – Carol, Space Foundation, Colorado Springs, Colo.

I was watching TV, “glued to the tube,” trying not to miss even an instant, absolutely fascinated. – TaylorTB on Twitter

I was going to summer school at Western State College in Gunnison, Colo., We didn’t have much access to TV, but managed to watch this. It was pretty amazing. – Bev, Denver, Colo.

I was growing up in Phoenix – it was a zillion degrees outside and I was so happy as a kid to have a bonafide excuse from mom & dad to be inside with A/C watching TV. The impact of the moment was too profound for a kid of 8 to really grasp, but I have carried that visual image of planting the flag in the moon dust my entire life. It has become an indelible life-time memory in black & white. Frankly, I still think the accomplishment is nothing short of astounding. – Barbara, Verizon, Southlake. Texas

Pictured: Buzz Aldrin on the Moon; photo by Neil Armstrong, courtesy of NASA