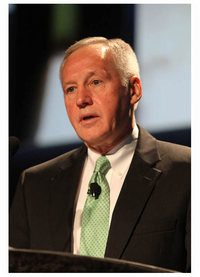 Carlson said that the NRO is rewriting its circa-1964 charter to give the agency more decision-making authority, more involvement in intelligence satellite requirements, and increased management control over its staff from the Air Force and CIA. He said he is also working on getting the flexibility to shift funds between programs as necessary.

Despite budget cuts, Carlson said that the U.S. is slated to launch several classified high-priority satellites crucial to national security over the next 15 to 18 months.

To read more about the Strategic Space Symposium, read the articles in this issue of Space Watch.

Carlson is also slated to speak at the 26th National Space Symposium.