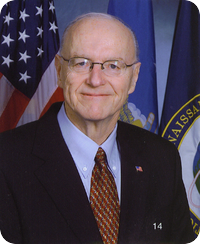 Following a National Space Symposium tradition, the 26th edition of the premier gathering of the global space community will feature a panel comprising former leaders of a major space organization. The agenda for the 26th National Space Symposium includes three decades of directors of the National Reconnaissance Office (NRO), an agency in the Department of Defense (DoD) that develops and operates overhead reconnaissance systems and conducts intelligence-related activities essential for U.S. national security.

Slated for April 12-15 at The Broadmoor Hotel in Colorado Springs, Colo., the 26th National Space Symposium will cover all the critical facets of the space industry – presented by the people who are making the decisions, running the companies, establishing the policies, and setting the course for the future.

In addition to the panel, the agenda will also spotlight the NRO with a featured presentation by Gen. Bruce Carlson, USAF, (Retired), current director of the NRO.

Headquartered in Chantilly, Va., the NRO was established in 1961 as a classified DoD agency. Declassified in 1992, the NRO is one of 16 intelligence community agencies. It is a hybrid organization, consisting of some 3,000 personnel, jointly staffed by members of the armed services, Central Intelligence Agency, and DoD civilian personnel. The director of the NRO reports to both the director of national intelligence and the Secretary of Defense and also serves as the assistant to the secretary of the Air Force (Intelligence Space Technology).

The 26th National Space Symposium, includes presentations, panels, workshops, and forums covering all aspects of space, a number of special dinners and luncheons, and presentations of space-related awards.