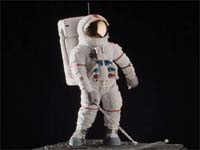 COLORADO SPRINGS, Colo. (Feb. 25, 2010) — Allen V. Robnett, a science teacher at Gallatin High School in Gallatin, Tenn., has been named the 2010 recipient of the Alan Shepard Technology in Education Award, which is given each year by the Astronauts Memorial Foundation (AMF), the National Aeronautics and Space Administration (NASA), and the Space Foundation in recognition of outstanding contributions to technology education by K-12 educators or district-level education personnel.

The Space Foundation, AMF, and NASA will present the award, which is named after Mercury Astronaut Alan Shepard, on April 12 at the Opening Ceremony of the Space Foundation’s 26th National Space Symposium at The Broadmoor Hotel in Colorado Springs, Colo.

Robnett was selected for his work developing two innovative high-school-level courses that use compelling subjects and hands-on experiences to motivate students to build their science, math, and technology skills.

“The programs use teenagers’ fascination with flying and astronomy as ‘hooks’ to interest them in science while simultaneously introducing them to the application of technology, science, and mathematics to questions that interest them,” said Robnett.

The astronomy class uses activities as diverse as calculating the mass of distant stars, participating in star parties with the local astronomy club, and gazing at the heavens through a telescope housed in a domed rooftop observatory. Students in the aviation class progress through all the material necessary to pass the FAA private pilot written exam as well as using classroom-based flight simulators to get the feel of flying a real airplane. Classroom exercises use these highly focused activities to illustrate math and science principles that can be applied across a broad spectrum of practical and theoretical topics.

Robnett began the development process by attending classes and workshops. He then developed the curriculum, obtained approval to launch the classes, and procured grants and in-kind donations to build classroom tools, including flight simulators, a planetarium, and the observatory. He teaches the courses and coordinates community and outside support, such as the NASA Planetarium on Wheels that visits the school each semester. Working with the nearby Sumner Regional Airport, he is even able to offer superior students free flight lessons.

“The principal goal was to foster interest in science, rather than to produce astronomers and aviators,” said Robnett. “The students appear to enjoy learning in the two classes, possibly influenced by the fact that I thoroughly enjoy it myself.”

About 80 of Gallatin High School’s 1,375 students participate in the classes each year. Gallatin is located about 25 miles northeast of Nashville.

About the Award
Alan Shepard, one of the nation’s original seven Mercury astronauts, was the first American to fly in space, one of only 12 humans who have walked on the moon, and a former AMF board member. The award named after him recognizes excellence, quality, and innovation in the development and application of technology in the classroom or to the professional development of teachers. This year’s judges included representatives from NASA, AMF, and the Space Foundation, and Alan Shepard’s daughter. More information about the award is available at www.AstronautsMemorialFoundation.org.

About the 26th National Space Symposium
The 26th National Space Symposium, April 12-15 at The Broadmoor Hotel, offers workshops, forums, panels, and presentations covering all aspects of space and includes programs targeted specifically at educators and students. The Opening Ceremony, which will feature the musical group Barrage along with presentation of the Shepard Award and the Space Foundation’s John L. “Jack” Swigert, Jr., Award for Space Exploration, is sponsored by Northrop Grumman.

More than 8,000 registrants, guests, speakers, exhibitors, and media representatives from around the world are expected to attend.

Symposium education activities include a full-day workshop for Space Foundation Teacher Liaisons, a group of nationally recognized educators who are passionate about space science. The event will have staying power in the form of hands-on curriculum that the teachers can immediately take back to their classrooms. Selected students, many of them in classes taught by Teacher Liaisons, will experience various aspects of the 26th National Space Symposium: high school students will tour the AMERICOM Government Services (AGS) Exhibit Center; younger students will attend “Audience with an Astronaut” sessions.

About the Astronauts Memorial Foundation
Founded in the wake of the Challenger accident in 1986, AMF honors and memorializes 24 astronauts who sacrificed their lives for the nation and the space program while on a U.S. government mission or in training. AMF is a private, not-for-profit organization approved by NASA to build and maintain two major facilities at the John F. Kennedy Space Center’s Visitor Complex: The Space Mirror Memorial and The Center for Space Education. Through the Center for Space Education, AMF partners with the NASA to provide space-related technology training to educators and individuals throughout the nation, to foster understanding of space exploration, to improve education through technology, and to improve the quality of the space industry workforce. For more information, visit www.AstronautsMemorialFoundation.org/.

About NASA
NASA is an agency of the United States government, responsible for the nation’s civilian space program. Operational since 1958, NASA’s mission is to pioneer the future in space exploration, scientific discovery, and aeronautics research. It has led U.S. space exploration including the Mercury and Gemini space programs, the Apollo missions to the Moon, the Space Shuttle, U.S. involvement in the International Space Station, the Hubble Telescope, and robotic interplanetary and distant space missions. NASA is also responsible for long-term civilian and military aerospace research and research focused on better understanding Earth, the solar systems, and the universe beyond. For more information, go to www.nasa.gov.