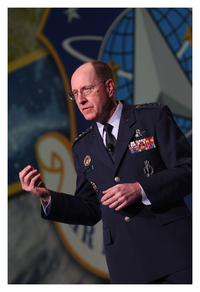 Gen. C. Robert Kehler, USAF, commander, Air Force Space Command, gave his “straight from headquarters” view at the 26th National Space Symposium, saying that his job is to think about what happens next..

“We know what we’ll look like in 2030; we’ll get to space then through EELV and growth of commercial,” he said. “But, but the question is: what next?”

“Need to recognize that we have had a great deal of success,” said Kehler, “because of the team — government, military, contractor, commercial.”

He said that space contributes across the spectrum, creating a need to understand and adapt to demands of asymmetric warfare. He also said, “for far too long, we have not taken the industrial base into account in the decisions we’ve made.”

Speaking about strategy, Kehler said, “One size does not fit all; there is no one strategy here; we need to understand requirements in each mission area, come up with different strategic ingredients, and a strategic recipe for each mission.”

Noting how things have changed, Kehler outlined the Then/Now scenario:

“We are on the edge of our ability to continue our string of success,” said Kehler, laying out the direction ahead:

Kehler said he saw AFSPC’s vision as being “the leading source of emerging and integrated space and cyberspace capabilities.”

He concluded by saying, “We don’t have all the answers, but we have conditions and approaches.

“At the end of the day, we must get this one right.”