Experts Consider What's Up There 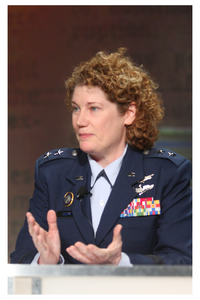 Perhaps the most worrisome aspect of the increasing utilization – and globalization – of space is a simple question: “what’s up there?” The Critical Issues – Space Situational Awareness & Space Debris panel at the 26th National Space Symposium examinedtwo different, but related, issues: the challenge of keeping abreast of what is taking place in near-Earth space, and the proliferation of space debris.

Presented in association with the AMOS Conference, a Project of the Maui Economic Development Board, Inc. (MEDB), the panel featured a special introduction by Sandy Ryan, AMOS Conference Director, MEDB, and was moderated by space author William B. Scott. Panelists included:

Arnold laid out the issues, saying, “Awareness of our space environment has never been more important,” but that most of the space tracking radars are located in the northern hemisphere, “making continuous coverage impossible.”

He also noted that every time we send something to orbit, we contribute to the debris. “We need to preserve the environment for the future of space by looking at methods to mitigate space debris – environmental cleaning of space,” he said.

Helms said that the U.S. Strategic Command has a tremendous responsibility because it does the space surveillance work. She said the collision of two satellites last February led to building the capability to do a conjunction analysis for more elements – about 11,000 objects – which provides standardized procedures to notify the owners and operators if there is a threat of conjunction.

Plus, she said, STRATCOM has taken over the commercial and foreign entities program, ensuring no degradation in service. “Better shared awareness is a way to work collaboratively to sustain space,” she said.

But, Helms said, there are still two tension points: Capacity and resource issues and transparency of information and national security interests

According to Johnson, there are about a half million pieces of debris 1 cm in diameter, any of which could cause a catastrophe should it collide with a satellite or vehicle. He said that national space policy requires governments to work to minimize creation of debris and that both NASA and COPOUS have adopted space debris mitigation guidelines.

Noting that the current amount of debris is already sufficient to cause interceptions and creation of additional debris, Johnson said that NASA has been working with DARPA for decades to study debris removal. The issue, he said, is that space is “an international commons,” making debris removal an international undertaking.

Harkening Henry David Thoreau’s warning, “Thank God men cannot fly, and lay waste the sky as well as the earth,” Harkins said that there is ore debris in space, but less resources and capabilities available in the future if there are collisions.

“Science can move us forward in some ways,” he said, citing developments such as

“These shifts will have a fundamental effect on space,” he said. “Items the size of a soccer ball will take the place of previously large satellites.”

Hall said that DARPA’s mission is to maintain the technological superiority of the U.S. military through high-payoff research and fundamental discoveries, focusing its space technology thrust on awareness, adaptability, and agility. Examples include:

“We must share observation and high-accuracy orbital data and leverage existing systems and technology,” he said, “to make advantage of industry’s capabilities.” He also said that discerning intent is critical.

The panel then addressed questions:

What role do you see small satellites playing?
Johnson: “I think they’re fine, but they need to follow the same rules that other satellites do, such as being deorbited within 25 years of mission end.”
Helms: “STRATCOM has thought about appropriate ways we should all behave.”

Do you foresee a time when there will be a commercial case for providing SSA capabilities?
Arnold: “We’d have to have something over and above what is available from the Air Force; maybe something looking permanently at GEO.”
Sheehan: “I think the commercial cooperative effort, although its non-profit, is showing that there is a business case; there is a need here. It could be developed as a service or as a turnkey capability.”

Should there be an ICAO for space?
Arnold: “WE can’t implement ICAO-like rules with satellites; many of them are not maneuverable.”
Sheehan: “People are already doing this — putting standards in place for debris mitigation. We do need to do it more, and faster.

What efforts are made to ensure space debris isn’t a problem for astronaut EVAs?
Helms: “Debris goes all the way down to the dust level — can see this on vehicle and solar panels. It’s a challenge to mitigate risks from these, to ensure there are no catastrophic failures. Astronauts are trained about what to do in the case of a debris event and EVA spacesuits are designed to manage particle-level debris.”

Does it make sense to get to a point of having a satellite autonomously assess and react to conjunction danger?
Hawkins: “As we move forward, satellites will become more capable. Some can already self-identify, self-locate.”
Hall: “Neighborhood watch technologies may work for a slow moving threat, but when relative velocities are high, we need more than just onboard surveillance.”
Johnson: “We are looking at new technology for the ISS, thinking about how we can pinpoint potential leaks quickly and accurately.”
Helms: “In training, we get sense of how fast you have to react and how you can isolate the leak.”