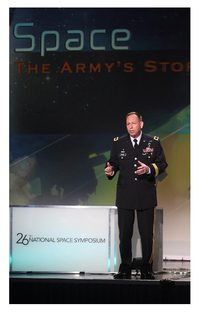 “Americans want war to be well contained and well defined,” said Gen. Story. “But that isn’t the reality in anti-terrorism activities. We have the job of providing anti-terrorist security.”

Story emphasized the importance of “investing in soldiers in the battlefield,” saying, “we need to enable them.” He spoke about “degraded, denied, and disrupted space operational environment,” saying that U.S. troops have not had adequate intelligence, such as knowing the size of an attack so they can be better equipped … and better aware of when they’re being interfered with.”

Story also said there is a need to understand what other solutions are available.

“Critical warfighter needs from space include: position, navigation and timing, and satellite communications.”