Moon May Be Shrinking 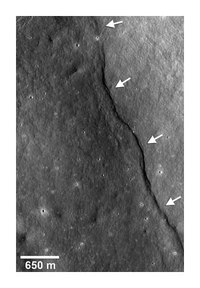 Newly discovered cliffs in the lunar crust indicate the moon shrank globally in the geologically recent past and might still be shrinking today, according to a team analyzing new images from NASA’s Lunar Reconnaissance Orbiter (LRO) spacecraft.

The results provide important clues to the moon’s recent geologic and tectonic evolution.

The moon formed in a chaotic environment of intense bombardment by asteroids and meteors. These collisions, along with the decay of radioactive elements, made the moon hot. The moon cooled off as it aged, and scientists have long thought the moon shrank over time as it cooled, especially in its early history. The new research reveals relatively recent tectonic activity connected to the long-lived cooling and associated contraction of the lunar interior.

“We estimate these cliffs, called lobate scarps, formed less than a billion years ago, and they could be as young as a hundred million years,” said Dr. Thomas Watters of the Center for Earth and Planetary Studies at the Smithsonian’s National Air and Space Museum, Washington, D.C. While ancient in human terms, it is less than 25 percent of the moon’s current age of more than four billion years. “Based on the size of the scarps, we estimate the distance between the moon’s center and its surface shrank by about 300 feet,” said Watters, lead author of a paper on this research appearing in Science August 20.

“These exciting results highlight the importance of global observations for understanding global processes,” said Dr. John Keller, Deputy Project Scientist for LRO at NASA’s Goddard Space Flight Center, Greenbelt, Md. “As the LRO mission continues in to a new phase, with emphasis on science measurements, our ability to create inventories of lunar geologic features will be a powerful tool for understanding the history of the moon and the solar system.”

Pictured: Over recent geologic time, as the lunar interior cooled and contracted the entire moon shrank by about 100 m. As a result, its brittle crust ruptured and thrust faults (compression) formed distinctive landforms known as lobate scarps. In a particularly dramatic example, a thrust fault pushed crustal materials (arrows) up the side of the farside impact crater named Gregory (2.1°N, 128.1°E). By mapping the distribution and determining the size of all lobate scarps, the tectonic and thermal history of the moon can be reconstructed over the past billion years. (courtesy: NASA/Goddard/Arizona State University/Smithsonian)