The Role of Space in Holiday Travel 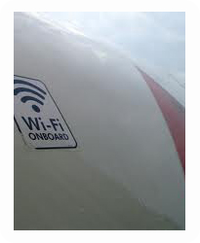 As we settle back into our routines after a holiday season that involved travel for many people, it is interesting to look back on the ways in which space may have played a part. Space systems can be used both to make the travel process more convenient and to provide entertainment while away from home. Here are just a few of the products and services from 2009 that you could have encountered during the past year.

In-flight broadband Internet, a concept brought to market over the past decade with limited initial success, is beginning to show promise. Using upgraded technologies including satellite solutions, the company Row 44 provides Internet access, voice services, cellular roaming and live television to specially equipped aircraft. The popularity of in-flight communications was highlighted in a Virgin America customer survey in which more than half of the respondents stated that in-flight Internet access would influence their airline preference. In October 2009, Virgin America announced a joint offer with Google to provide free in-flight WiFi to customers during holiday travel. Other airlines are moving forward with similar services, and a 2009 forecast estimated that the number of Internet-enabled airplanes would increase from 25 the year before to more than 800 by the end of 2009.

The satellite-based GPS network provides the basis for a number of new products. Garmin, Magellan, and other manufacturers have created innovative units such as a waterproof handheld GPS device for golfers that calculates distances to the green and other points on a golf course, providing the user with precise information for club selection and strategy. Garmin’s Golflogix, Sky Golf’s Sky Caddie and Sureshot’s GPS Golf System are among the products available.

The International Spy Museum in Washington, D.C., offers a game in which visitors use handheld GPS devices to navigate through the nation’s capital attempting to track down “suspects.” The GPS ranger device enables users to accurately plot a course while receiving text messages, audio, video and other intelligence information from officials.

On the more adventurous side of travel experiences, satellite technology is used to both protect and assist competitors in the annual Iditarod Trail Sled Dog Race across Alaska, using GPS services supported by the Iridium communications satellite system. The Iditarod Trail Committee is now requiring that the tracking device, provided by race-tracking company IonEarth, be attached to each dog sled. The device transmits a sled’s location every 15 minutes, allowing viewers and supporters to track the progress of each contestant throughout the race.

The fusion of GPS and satellite-based communication technology has resulted in unique consumer applications. In one example, the SPOT Satellite Messenger, marketed by a subsidiary of telecommunications provider Globalstar, provides notifications when users need emergency assistance or simply want to tell friends or family of their location. The device, used by hikers, sailors, pilots, hunters and others, connects with Globalstar’s satellites to send a one-way signal conveying the user’s location, based on GPS-derived coordinates. SPOT sells a variety of add-on plans in conjunction with the basic handheld emergency locator. These include a tracking service in conjunction with Google Maps, roadside assistance plans and search and rescue insurance.

This – and much more – information about space products and services can be found in The Space Report 2010: The Authoritative Guide to Global Space Activity. To order a copy in book, PDF, or CD-ROM format, go to www.TheSpaceReport.org.