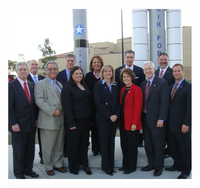 Several changes were made to the Space Foundation’s Board of Directors at the organization’s annual meeting in January as three new members were added and two retired.

The new board members are:

In addition, the following Board members are continuing their terms:

Retiring from the board are Robert A. Bednarek and Alexis C. Livanos, Ph.D., both of whom served since 2005 and have been named Space Foundation Life Directors.