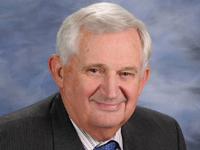 COLORADO SPRINGS, Colo. (Mar. 3, 2011) — James E. Richmond, superintendent of Charles County Public Schools in Maryland (CCPS) has been selected by the Astronauts Memorial Foundation (AMF), the National Aeronautics and Space Administration (NASA) and the Space Foundation as the winner of the 2011 Alan Shepard Technology in Education Award. Named for Mercury Astronaut Alan Shepard, the award will be presented during the opening ceremony of the 27th National Space Symposium on April 11 at The Broadmoor Hotel in Colorado Springs, Colo.

The Alan Shepard Technology in Education Award is given annually in recognition of outstanding contributions to technology education by K-12 educators or district-level education personnel. The superintendent of a district with nearly 27,000 K-12 students, Richmond has launched multiple programs to help his students excel in science, technology, engineering and mathematics (STEM).

“A long-time advocate for STEM education, James Richmond has made a lasting impact on tens of thousands of students,” said Dr. Stephen Feldman, president and CEO of the Astronauts Memorial Foundation, which administers the award. “And, through the programs he has created, he is helping to develop a future workforce of scientists and engineers.”

Located 25 miles south of Washington, D.C., CCPS has been able, under Richmond’s guidance, to take advantage of its proximity to the Naval Surface Warfare Center, Andrews Air Force Base and the Patuxent River Naval Base to develop compelling and real-life-based technology programs for students. In addition, CCPS has worked closely with the Space Foundation to bring space-related STEM programs to teachers and students.

CCPS programs initiated under Richmond include:

“Jim Richmond is a vocal champion for STEM and for using space themes to engage students in technology subjects,” said Space Foundation CEO Elliot Pulham. “He is also a good friend of the Space Foundation and an extraordinary educator.”

Because CCPS has an educational partnership with the Space Foundation, Pulham said the Space Foundation recused itself from voting when Richmond’s nomination advanced to mitigate any perception of a conflict of interest. Richmond was elected unanimously by the other members of the selection committee.

About Richmond
In his fourth term as superintendent of CCPS, Richmond started his education career with Charles County Public Schools in 1966 as a classroom teacher. Since then he has served as: social studies teacher, vice principal, high school principal, director of supervision and curriculum, director of school administration and regional administrator. He has a bachelor’s degree in history and political science from Tusculum College, Greeneville, Tenn., and a master’s degree in educational administration from Bowie State University, Bowie, Md. Richmond earned his specialist (EdS) degree in school administration from George Washington University in Washington, D.C. He was named as the Maryland State Superintendent of the Year in 2003, and is the recipient of numerous awards for excellence and his work in the area of minority achievement.

About the Award
Alan Shepard, one of the nation’s original seven Mercury astronauts, was the first American to fly in space, one of only 12 humans who have walked on the moon, and a former AMF board member. The award named after him recognizes excellence, quality and innovation in the development and application of technology in the classroom or to the professional development of teachers. More information about the award is available at www.astronautsmemorialfoundation.org.

Symposium education activities include a full-day workshop for Space Foundation Teacher Liaisons, a group of nationally recognized educators who are passionate about space science. Plus, selected students, many of them in classes taught by Teacher Liaisons, will experience various aspects of the 27th National Space Symposium: high school students will tour the Boeing Exhibit Centers; younger students will attend “Audience with an Astronaut” sessions.