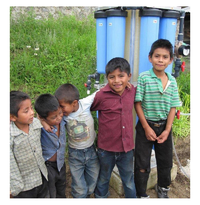 Technology developed to provide safe drinking water in space is now being deployed in rural communities in developing countries. Water Security Corp. supplies a Certified Space TechnologyTM for the disinfection of water in countries where electricity is scarce or unreliable.

In 2007, Water Security Corp.’s Microbial Check Valve (MCV system) was inducted into the Space Technology Hall of Fame®. This long-term, slow release iodine-based disinfection system is in use aboard the International Space Station, and Water Security Corp. now applies MCV technology to eliminate bacteria and viruses in contaminated water here on Earth.

Working with humanitarian and other organizations, Water Security Corp. is providing water purification systems in developing countries where poor drinking water is a major health concern, such as in Mexico where the state of Chiapas has an infant mortality rate three times higher than for Mexico as a whole.

The State Government of Chiapas, led by Governor Juan Sabines, initiated the program to bring potable water to small rural communities. More than 440 systems were installed in Chiapas in 2010, the first large-scale deployment of village systems. The systems are primarily located in rural mountain communities of 500 or so people, where many of the villagers are indigenous Mayan. A contract is in place for an additional 350 systems to be installed in rural Chiapas.

Pictured: Boys in Chiapas, Mexico, stand in front of the new water purification system for their school. The technology was developed by Water Security Corp., a Space Foundation Space Certification partner.