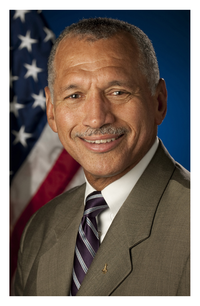 Now, more than ever, the space industry’s leading decision makers want to hear from the head of the U.S. space program as he steers his organization through the critical months to come.

The Space Foundation’s 28th National Space Symposium, which runs April16-19 at The Broadmoor Hotel in Colorado Springs, Colo., will feature NASA Administrator Charles F. Bolden, Jr., speaking about planning at NASA and its impact on all aspects of our nation’s future in space.

Bolden’s 34-year Marine Corps career included 14 years with NASA’s Astronaut Office, as both an astronaut and in a number of technical assignments, including overseeing safety efforts for the return to flight after the 1986 Challenger accident, serving as lead astronaut for vehicle test and checkout at the Kennedy Space Center and serving as assistant deputy administrator at NASA Headquarters. Between 1986 and 1994, Bolden flew four space shuttle missions, commanding two. His flights included deployment of the Hubble Space Telescope and the first joint U.S.-Russian shuttle mission.