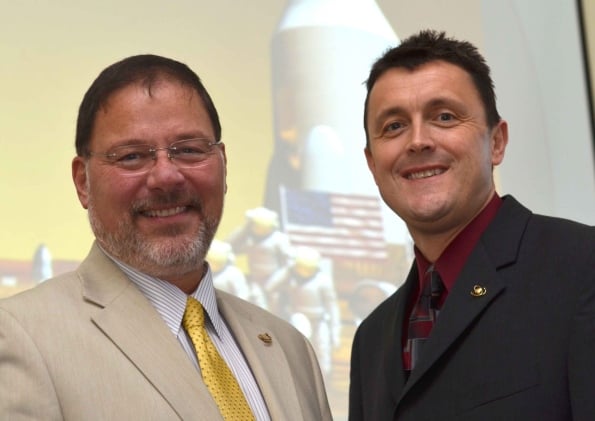 Space Foundation CEO Elliot Pulham and Vice President-Education Iain Probert  traveled to the Isle of Man last month for a series of meetings and education presentations designed to enhance the relationship between the U.S. and Isle of Man space industries. Pulham and Probert are pictured, right, in a photo taken by news media in the Isle of Man.

Located in the Irish Sea between the islands of Great Britain and Ireland, the Isle of Man is a self-governing Crown Dependency of the United Kingdom. With total space revenues in excess of $1.5 billion USD, the island is the headquarters for 12 space firms involved in work such as developing space tourism technology and satellite communications. In 2010, industry analyst Ascend named the island as the fifth most likely nation to put the next person on the moon. The visit was coordinated by Space Ventures Consulting, a network of affiliates and collaborative partners that provide consulting and project management for a number of areas of business development within the space arena, including space innovation in space, technological and satellite capacity in developing nations and space awareness and education campaigns.

To see television coverage of the visit, click here.