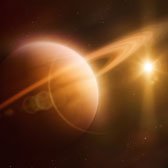 The Space Foundation co-sponsored and hosted a booth at the Colorado Springs Philharmonic’s March 10 Vanguard Performance of Holst’s The Planets, Stravinsky’s Fireworks and Gandolfi’s The Garden of Cosmic Speculation. Also co-sponosred by the Colorado Springs Gazette and The Boeing Company, the concert was conducted by Associate Conductor Thomas Wilson and included a special cinematic presentation from the Colorado College Film Studies Program.

The Colorado Springs Philharmonic will play a portion of Jupiter, the Bringer of Jollity and the entire Mars, The Bringer of War, from The Planets at the opening ceremony of the 28th National Space Symposium on April 16.