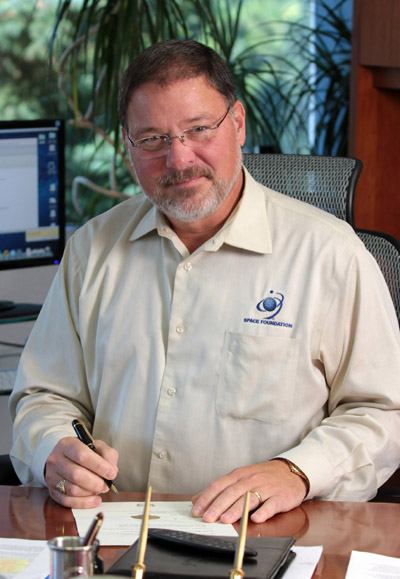 If there’s one important thing that a focused, optimistic and sustainable space exploration program can uniquely contribute to society right now, it is a sense of optimism that has long been missing in our media, our classrooms and the dimly-lit corridors of government.

At some level, I think most of us would like to break out of our cycle of negativity. We all want change for the better – in our schools, communities, nations and world. Virtually every self-help guru will admonish that, in order to manifest change in the world, the first thing we need to change is our minds – our viewpoints and outlooks that condition our world view. In the words of self-affirmation guru Mike Dooley: Thoughts Become Things: Choose the Good Ones!®

Along those lines I’d like to suggest that we all heed the sage advice of Dr. Phlox, the inter-species physician and ship’s doctor aboard the starship NX-01 Enterprise: “Optimism, Captain! Optimism!”

There are solutions to the many vexing challenges confronting us. A focused, optimistic and sustainable program of space exploration, development and utilization could help us realize many of them. Not all of them, of course, but many. Space is not a panacea, but I do believe it offers more potential bang for the buck than any other single field of endeavor.

Let’s take energy. There’s little doubt that one of the single largest issues vexing the planet is energy. Our addiction to fossil fuels contributes to widespread geopolitical conflict; it results in an alarming and unabated increase in atmospheric carbon levels, the destruction of our shielding ozone layer, environmental disasters resulting from undersea drilling and overseas transportation of oil and deforestation of the vital, oxygen-producing forests that renew our atmosphere.

Now, let’s consider some of the energy-related developments that have come from space:

By the way, let’s not forget that a big part of energy efficiency technology in recent decades has been the advent of home, office and automotive insulating materials spun off from space technologies developed to solve in-space and trans-atmospheric thermal protection challenges. As we go deeper into space, where radiation hazards and other bogeymen await, insulation technologies will also be pressed toward new frontiers, with vast benefit on Earth.

So, a focused, optimistic and sustainable space exploration program will necessitate research and development, necessitate the development of actual products from the new space technologies and result in the creation of new jobs, in new industries, while solving some of our most vexing Earth-bound challenges. Those of us who have spent our careers in the space industry have no problem understanding this. We’ve seen it all before, and we know it will work again.

In addition to solving the energy crisis, saving the home planet, creating global economic prosperity and rejuvenating our national sense of purpose — what else might a focused, optimistic and sustainable space exploration program do for us?

I think the most important contribution of such a program might be the reversal of decades of negativism that have penetrated our culture and poisoned the fundamentally optimistic American soul from within. Wouldn’t it be great if everyone, from pre-schooler to president, could once again believe that things are getting better and the best is yet to come?

I don’t think that this is just sentimentality. Isn’t it time to replace the social angst and defeatist fatalism that gave us goth and grunge with something better? Do our kids really need to grow up surrounded by media, politicians, academics and role models who bombard them with the view that the world is doomed to a downward spiral from which we can never recover? While hope, in and of itself, is not a strategy, isn’t there strategic value in creating hope? And in creating the expectation — the imperative — that the world can, and will, get better?

Do we have the courage to give America belief in its ability to dare greatly again?

I think we must have that courage.

Space exploration is inherently courageous and fundamentally optimistic. It thrives on doing the things that people say cannot be done. It fuels our belief in ourselves and in our humanity. The way it works on our hearts and minds is at least as important as the way it works in creating knowledge, innovation and industry.

At the Space Foundation, our mission is “to advance space-related endeavors to Inspire, Enable and Propel humanity.”