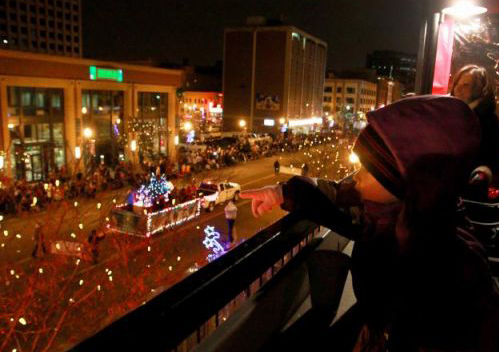 The Festival of Lights Parade is an annual tradition in Colorado Springs and this year will feature a unique float created by the Space Foundation. The 2012 theme is “Home for the Holidays” and the Space Foundation float will include school children surrounding a glowing globe of the Earth, our home in the universe. The Earth theme also echoes a feature of the new Space Foundation Visitors Center –  Science On a Sphere® (SOS).

The parade is the highlight of the annual Festival of Lights, a series of events to celebrate the December holiday season, including cultural and artistic programs, performances and other festivities for the enjoyment and education of the general public. The Festival of Lights Parade will benefit the Gazette-El Pomar Foundation Empty Stocking Fund, which provides resources for 15 local health and human service agencies in the Pikes Peak region on the front lines of helping people in crisis and assisting others in attaining self-sufficiency. The 2012 Grand Marshall is Forest Supervisor Jerri Marr, who played a pivotal role in last summer’s devestating Waldo Canyon fire in Colorado Springs.