NASA Administrator Charles F. Bolden, Jr., will return to the Space Foundation’s annual Space Symposium, April 8-11 at The Broadmoor Hotel in Colorado Springs, Colo., and will discuss what’s in store for his agency’s future. 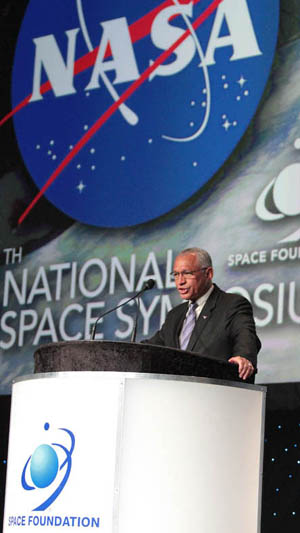 About Bolden
Bolden’s 34-year Marine Corps career included 14 years with NASA’s Astronaut Office, both as an astronaut and in a number of technical assignments, including overseeing safety efforts for the return to flight after the 1986 Challenger accident; serving as lead astronaut for vehicle test and checkout at the Kennedy Space Center and serving as assistant deputy administrator at NASA headquarters. Between 1986 and 1994, Bolden flew four Space Shuttle missions, commanding two. His flights included deployment of the Hubble Space Telescope and the first joint U.S.-Russian shuttle mission.

About the Space Symposium
The Space Symposium offers presentations covering all aspects of space. Returning for 2013 will be the New Generation Space Leaders programs for young, up-and-coming space professionals, age 35 and younger.

The Space Symposium is offered in conjunction with Cyber 1.3, which examines issues related to cyberspace. Separate registration is required for Cyber 1.3 and secure online registration for both is available online at www.NationalSpaceSymposium.org.

An Early Bird Discount rate is in effect until March 15 for standard industry Space Symposium registration. The registration rate for active duty military and government personnel has been lowered to 2010 pricing, now $790 for the four-day Symposium.