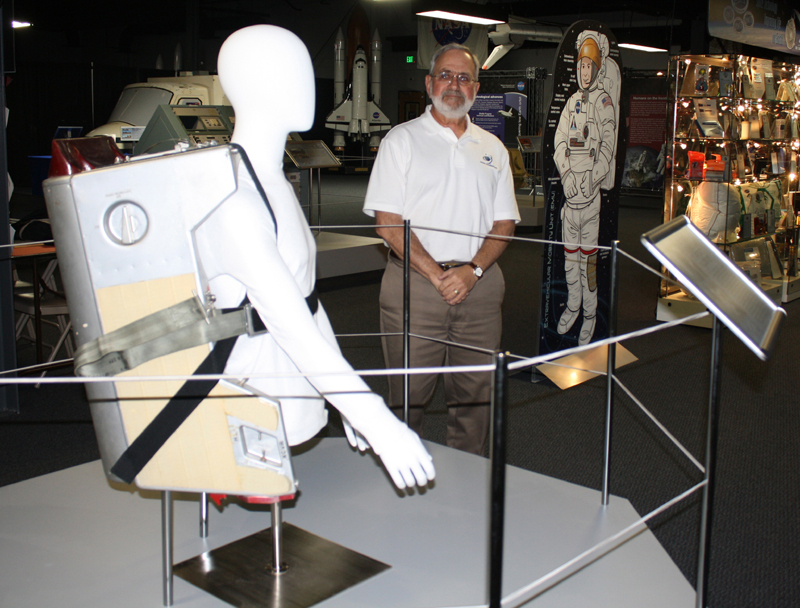 The Space Foundation Discovery Center recently put on display a Maneuvering Unit Backpack that was used to train the Gemini VIII astronauts. It was part of an experiment in which astronaut David Scott was to demonstrate the capabilities of an improved version of the Hand Held Maneuvering Unit (HHMU) that Ed White demonstrated on the first U.S. Extravehicular Activity (EVA), or space walk, on Gemini IV.

At that time, I worked for NASA at the Manned Spacecraft Center in Houston, now the Johnson Space Center, in a small, newly formed group which was given the responsibility to develop techniques and procedures and to train the astronauts in this new thing called EVA.

When Ed White flew the HHMU, he had only a few seconds of oxygen propellent in the two bottles that were part of the HHMU. The job that Dave Scott was to perform on Gemini VII was to translate along handrails on the spacecraft to its aft end where he would strap on a backpack with several times the amount of propellant (this time freon gas) as Ed White had, pick up the HHMU, connect it to the backpack and fly over the top of the Gemini to the Agena spacecraft, to which the Gemini would have already been docked.

As it turned out, Scott never got to do his EVA. Not long after the Gemini Capsule reached orbit, Neil Armstrong completed the first-ever docking of two spacecraft.

Shortly after docking, the connected Gemini and Agena spacecraft started rolling violently. Armstrong was forced to undock from the Agena, at which time he discovered the problem – one of the thrusters on the Gemini Capsule was stuck on. His only recovery option was to activate the capsule’s re-entry jets to stop the spinning. Because of this, he had to abort the remainder of the mission (including Scott’s EVA) and return to Earth.

Although this was a setback for the Gemini Program, and for the development of EVA Maneuvering Units, NASA had already scheduled additional HHMU testing on two subsequent flights, as well as testing of an advanced maneuvering backpack (called the Astronaut Maneuvering Unit) which had thrusters attached to it instead of using a handheld unit. 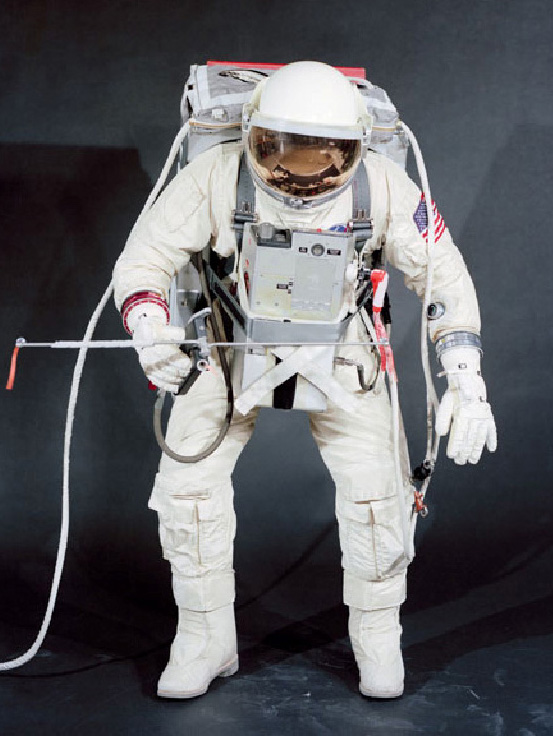 Problems the Gemini astronauts encountered with their ability to adequately position and hold themselves in place during the EVAs caused them to overheat almost to the point of exhaustion. Because of this, NASA only had the opportunity to test a maneuvering unit on Gemini X, and that was using an HHMU. They were never able to test the backpack type maneuvering unit. That would have to wait until after the Apollo moon landings, when we would perform a series of maneuvering unit experiments in the Skylab Space Station during the early 1970s.

It was during the development of the Skylab Maneuvering Unit Experiment that I discovered Colorado. The Skylab hardware was designed and built by Lockheed Martin (then Martin Marietta) in Denver, and I, as Skylab Experiment Procedures Officer and a co-principal investigator for the maneuvering unit experiment, spent a lot of time working with the engineers and technicians in Denver on the design of the maneuvering unit, the development of its flying procedures and experiment protocol and training of the astronauts who would perform the flight experiment in the Skylab Space Station. From what we learned about EVA in Gemini and about maneuvering units in Skylab, we were able to develop the successful Manned Maneuvering Unit for the Space Shuttle and achieve the dream that existed since the days of Buck Rogers (and even today’s movie, Gravity) of being able to fly through space untethered and free.

On a personal standpoint, I have been lucky to have worked with and known a number of the early astronauts and space pioneers such as Bruce McCandless and Bob Stewart who first flew the Manned Maneuvering Unit on the Space Shuttle in 1984. Incidentally, both Bruce and Bob now live in Colorado. Maybe there was something about wanting to get back to mountains near where the Maneuvering Unit was “born” that drew the three of us away from the hot, humid (and flat) Gulf Coast, or maybe it was the beauty, climate and people of Colorado.

I remember in 1966, the first time I met a “real” astronaut. I was going to the first Gemini EVA training exercise I was going to be involved in. As I walked through the Astronaut Locker Room to the training area, I came across one of the astronaut crew members (who shall remain nameless). He was changing from his street clothes into his space suit and as I came in, he was standing in his skivvies. Now, I don’t know what kind of underwear I expected a “hero” to wear, but it certainly wasn’t the yellow and red polka dot boxer shorts he was wearing. Emotionally, I was devastated. It was almost like, when I was a youngster and found out that Santa Claus really didn’t exist!