The Space Foundation’s flagship publication The Space Report: The Authoritative Guide to Global Space Activity is often cited as a source in news reports about the global space industry. One example is a recent Wall Street Journal article about foreign satellite launches in India. 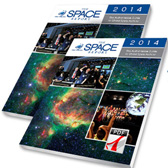 The Space Report is published annually by the Space Foundation, which works with a leading aerospace consulting firm, Futron Corporation, to research and analyze government and industry trends in space activity.

The 160-page book contains worldwide space facts and figures, and is illustrated with photographs, charts and graphs. In addition, The Space Report includes an overview of each sector, easy-to-understand definitions and up-to-date information on space infrastructure, facilities, launches and programs. Following are some of the facts and analyses found in The Space Report 2014:

Read more by ordering a copy of The Space Report 2014, a valuable resource for government and business leaders, educators, financial analysts, students and space-related businesses.

The report can be purchased — in print or as a downloadable PDF – for $399. Purchases can be made online at www.TheSpaceReport.org.