Congress returned in January to begin the second session of the 114th Congress. The year 2016 will be busy, but Congress will be in session somewhat infrequently, due to the November elections. In spite of this fact, government and industry are hopeful that a NASA re-authorization and an FAA re-authorization bill could move through this year. There's also an optimistic beacon in the form of the American Space Renaissance Act, which Congressman Jim Bridenstine (R-OK) announced earlier this month in Washington. Specifics of the comprehensive reform bill have yet to be revealed, but the Congressman expects to unveil the legislation in April at the 32nd Space Symposium.

On Jan. 13, the Space Foundation's Washington, D.C., team attended a briefing from the Japan Aerospace Exploration Agency (JAXA), which included updates to Japan's space budget and information about ongoing and planned missions. You can read more about JAXA in this month's Second View. 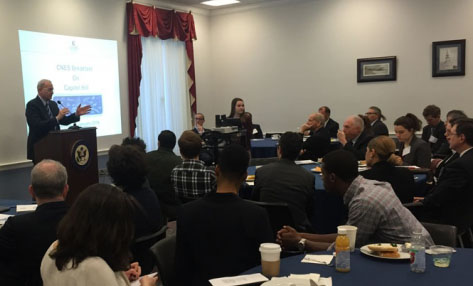 The morning of Jan. 19, an incredibly diverse group of approximately 50 people braved the below-freezing weather to attend a breakfast briefing by Jean Yves Le Gall, President of the Centre National d'Etudes Spatiales, or "CNES," the French Space Agency (pictured). President Le Gall presented two videos before beginning his remarks, during which he outlined the five main areas of focus for CNES (Ariane 6, Science, Earth Observation, improved telecommunications technologies and defense applications) and discussed the agency's budget, opportunities and challenges. Le Gall also expressed his appreciation for the legacy of positive cooperation between the U.S. and France in space.

President Obama's final annual Budget Request is scheduled for release at the beginning of February, and as usual, the Space Foundation D.C. team will track the budgetary process from request through appropriation. Expect the relevant committees on the Hill to start moving the budget process along fairly quickly this year.