March was a busy month in the space policy community. On March 7, the House of Representatives passed the NASA Transition Authorization Act of 2017, its first NASA Authorization bill in over six years. The bill, largely bipartisan, had previously passed the Senate in February, and authorizes $19.5 billion in funding for the agency in Fiscal Year 2017. The bill was signed into law by President Trump on March 21, 2017.

On March 8, the House of Representatives Subcommittee on Space held a hearing titled “Regulating Space: Innovation, Liberty, and International Obligations.” The committee invited several distinguished witnesses from across academia and the government to engage with the members on a wide array of issues, including the regulation of non-traditional private sector space activities, orbital debris removal guidelines, and the 1967 Outer Space Treaty and its implications for present day policy. 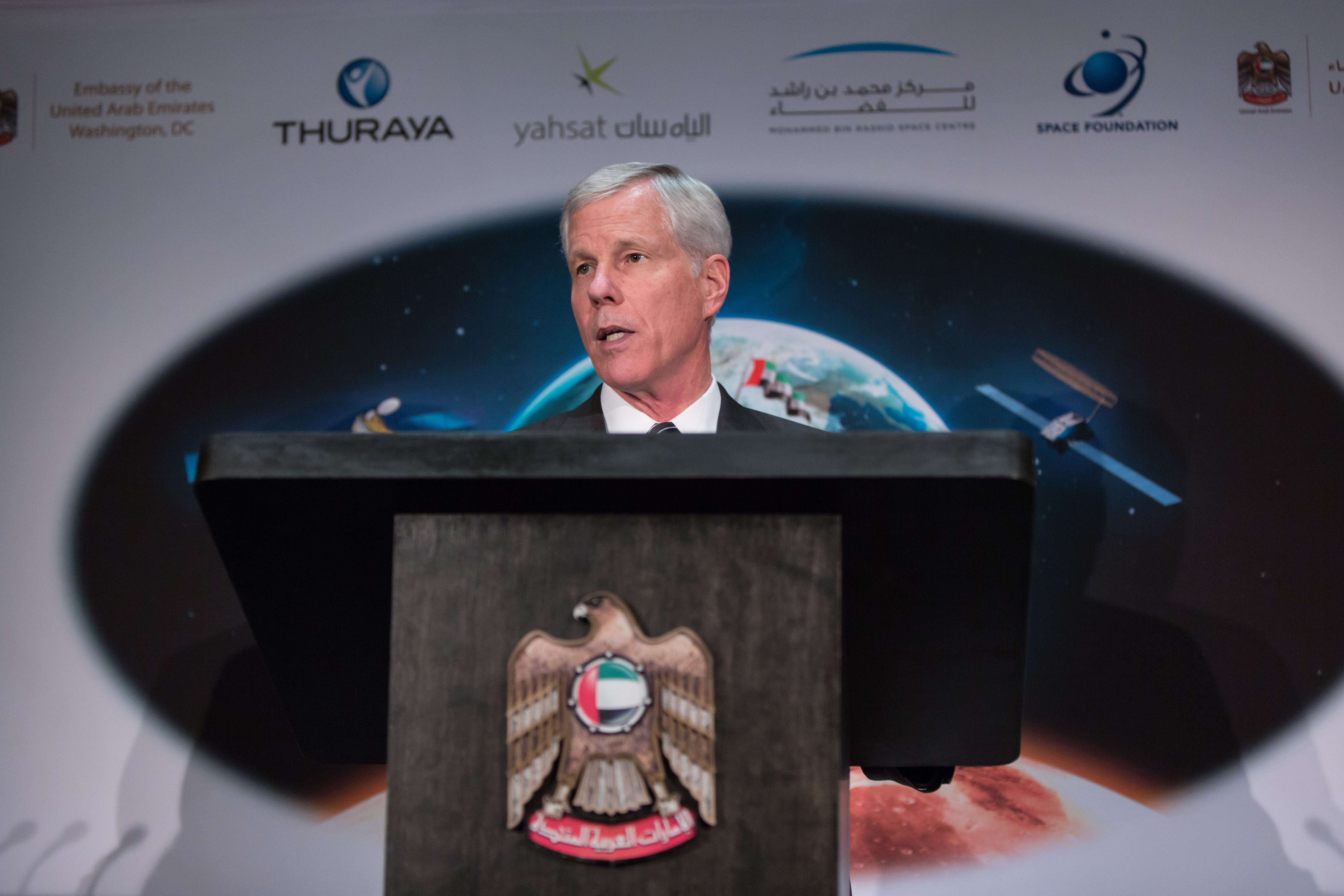 On the evening of March 8, the Space Foundation co-sponsored a reception at the Embassy of the United Arab Emirates along with the UAE Space Agency, the Mohammed Bin Rashid Space Centre, and satellite communications companies Thuraya and Yahsat. General William L. Shelton, USAF (Ret.) and Vice Chair of the Space Foundation’s Board of Directors, delivered remarks to the audience gathered at the embassy, (pictured).

On March 16, the White House released a preliminary version of the forthcoming President’s budget request. The proposed budget, which would decrease NASA’s funding by 0.8 percent from its previous appropriation, fully funds NASA’s SLS and Orion programs and encourages NASA to continue its use of public-private partnerships. The request provides no funding for the Asteroid Retrieval Mission (ARM), a Europa lander, or four Earth Science Missions (PACE, OCO-3, DSCOVR Earth-viewing instruments, and the CLARREO Pathfinder). It would also eliminate NASA’s Education office and focus the agency’s education efforts in the science mission directorate.

There are no specific numbers or details given on appropriations for the FAA’s Office of Commercial Space Transportation, or space-related Air Force programs. The request does specify NOAA’s maintenance of the JPSS and GOES satellite programs, despite the agency facing a potential 16 percent overall cut in funding. It also calls on NOAA to expand use of commercial data in weather models, and produce savings by better assessing the “risk of a gap in polar satellite coverage.” The full budget is expected to be released in May.

On March 22, the House or Representatives Subcommittee on Space held a hearing titled “The ISS after 2024: Options and Impacts.” The committee discussed the future of the Space Station, corresponding international relations and potential impacts on and roles for both NASA and the U.S. commercial space industry moving ahead.