For over 60 years, NORAD and its predecessor, the Continental Air Defense Command (CONAD), have tracked Santa along his yuletide journey. It all began on Christmas Eve back in 1955 after a Colorado Sears Roebuck & Co. advertisement directed children to call Santa direct – only the number was misprinted. Instead of reaching Santa, the phone rang through to the CONAD Commander-in-Chief’s operations “hotline” phone. After receiving a number of calls from kids asking where Santa was and realizing what had happened, the CONAD staff decided to update children with Santa’s location according their radar screens all throughout the evening.

Today, NORAD uses four high-tech systems to track Santa – radar, satellites, Santa Cams and fighter jet aircraft. Not only do these systems utilize a variety space technology, but the tradition of tracking Santa’s progress itself inspires children around the world to think about how space technology and exploration play an increasingly important role in our daily lives. Three hundred and sixty-five days a year, NORAD Canadians and Americans work together to monitor our airspace and waterways for potential threats by conducting the NORAD missions of aerospace warning, aerospace control and maritime warning.

Beginning December 1st, on your home computer and on your smart phone, you can join NORAD as they count down the days to Santa’s launch from the North Pole.  Then on December 24th, you can tune in once again to join the experience of tracking Santa and his reindeer across the globe by logging onto www.noradsanta.org and for regular updates about the cool games and other fun activities that will be offered on the website, visit the NORAD Tracks Santa Facebook page at www.facebook.com/noradsanta.  You may also call for information at 1-877 HI NORAD or email [email protected]. 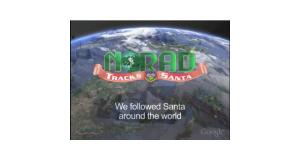