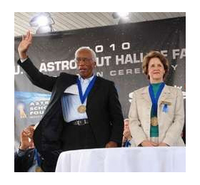 In a ceremony hosted by TV actor Jon Cryer, two Space Foundation directors were inducted into the U.S. Astronaut Hall of Fame® on June 5 at the Kennedy Space Center Visitor Complex. The two new inductees were:

Located in Titusville, Fla., the U.S. Astronaut Hall of Fame® is part of the Kennedy Space Center Visitor Complex (KSCVC). Under an agreement with KSCVC, the Astronaut Scholarship Foundation (ASF) serves as a consultant in the operation of the Hall, supervising the selection, by an outside committee, of astronauts for enshrinement in the Hall of Fame, obtaining personal artifacts for display in the museum, and participating in induction ceremonies.

About Thornton
A four-time Space Shuttle astronaut, Thornton served as mission specialist aboard the first Hubble Space Telescope (HST) repair mission, STS-61, alongside fellow inductee Ken Bowersox and partnered with astronaut Tom Akers on two spacewalks to replace the solar arrays, install corrective optics, and add additional computer memory. In 2008, Thornton became director of the University of Virginia’s Center for Science, Mathematics and Engineering Education. She was elected to the Space Foundation Board of Directors in 2010.

About Bluford
Bluford, a four-time space shuttle astronaut, assisted in developing techniques for nighttime operations as a mission specialist and flight engineer aboard STS-8, the first night launch and landing of the Space Shuttle. He was elected to the Space Foundation Board of Directors in 2000 and re-elected for a second term to serve until 2007. He was name a Life Director in January 2007.

The other two astronauts 2010 Astronaut Hall of Fame® inductees were:

Click here to see Florida Today coverage of the event.