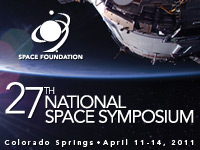 COLORADO SPRINGS, Colo. (Apr. 7, 2011) — The Space Foundation will host a series of media briefings on a variety of space topics during the 27th National Space Symposium April 11-14, 2011, at The Broadmoor Hotel in Colorado Springs, Colo. All registered reporters are welcome to attend and reporters will be able to call in on many of the briefings.

Most of the sessions will be held in the Space Foundation Media Center, located in the Primrose Room on the second floor of Broadmoor Hall (above the Boeing Exhibit Center North). This Alert lists sessions scheduled as of April 6, 2011. The sessions and/or presenters are subject to change.

To attend, reporters must be registered to attend the 27th National Space Symposium. Registration is free to accredited media.

3:45 — 4:30 p.m. Space Foundation Media Center
Award-Winning Space Journalists
Featuring recipients of the 2011 Douglas S. Morrow Public Outreach Award:
Marcia Dunn, The Associated Press
Jay Barbree, NBC News
Topic:
Behind the scenes view of the space business from journalists who have been there; Barbree has covered every manned U.S. launch from Mercury to the Space Shuttle and Dunn is known for her insightful and thorough print coverage of the Shuttle program.
Contact: Janet Stevens/Carol Hively, [email protected]

Online registration and more information, including agenda, speakers and exhibitors, are available at www.NationalSpaceSymposium.org. 27th National Space Symposium registrants, 35 years old and younger, who are interested in attending new generation events must indicate their interest when they register for the Symposium by checking the appropriate boxes on the online registration form.

Media registration, including access to all media briefings, is complimentary.