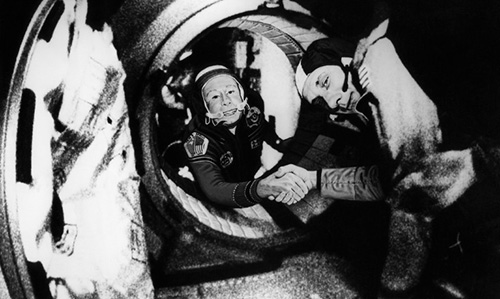 COLORADO SPRINGS, Colo. (Oct. 11, 2019) – The Space Foundation extends its deepest sympathies to the family, friends, and countrymen of Russian cosmonaut and spacewalking pioneer Alexei Leonov, who died today at the age of 85 in Moscow. Leonov became the first human to walk in space on March 18, 1965, just weeks before NASA astronaut Ed White’s first spacewalk June 3, 1965.

Leonov twice received his county’s top honor, Hero of the Soviet Union, and was one of the most notable actors of the Space Race. He became a leading champion of the global space community through his international friendships and his warm example, words, writings, and artistic talents.

“Leonov’s 1975 Apollo Soyuz handshake, and subsequent friendship, with NASA astronaut General Thomas Stafford demonstrated to the world the peaceful possibilities that international collaboration in space can bring to humanity in the heavens and on Earth,” said Tom Zelibor, Space Foundation, Chief Executive Officer. “It is a legacy that endures today on the International Space Station and will go even further on future missions to the Moon, Mars, and beyond. And it will remain a North Star to follow forevermore. We are all the better for his courage, leadership, and life.”

“On a side note, the Space Foundation honored Leonov’s good friend General Stafford this year, presenting him with our highest honor, the General James E. Hill Lifetime Space Achievement Award.”