Strategic Space Symposium to Look at Space from a Warfighter's Perspective 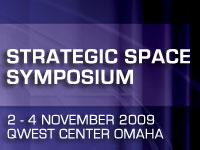 COLORADO SPRINGS, Colo. (Sep. 8, 2009) — The upcoming Strategic Space Symposium will include a luncheon featuring two high-ranking military leaders who will look at how space serves the needs of today’s warfighters.

William G. Hart, vice president and general manager, Space Systems, Space and Airborne Systems for the Raytheon Company will serve as corporate host for the luncheon.

The Symposium, which is jointly sponsored by the United States Strategic Command (USSTRATCOM) and the Space Foundation, will be held Nov. 2 – 4 at the Qwest Center Omaha in Omaha, Neb.

The Strategic Space Symposium offers space and defense professionals an unparalleled opportunity for interactive discussion and exposure to the latest space technologies at an astonishingly low price of only $395 for active duty military/government (excludes government contractors) if paid by Nov. 4. The industry/educator/nonprofit/contractor rate is only $495 for if paid by Sept. 18, after which the rate goes up to $595. Limited registration is free for qualified media. For details, go to www.StrategicSpaceSymposium.org.

About Raytheon
Raytheon, the luncheon co-sponsor, is a technology and innovation leader specializing in defense, homeland security, and other government markets throughout the world. With a history of innovation spanning 87 years, Raytheon provides state-of-the-art electronics, mission systems integration, and other capabilities in the areas of sensing; effects; and command, control, communications and intelligence systems, as well as a broad range of mission support services.

In addition, the Symposium will feature a series of track and breakout sessions, featuring another strong contingent of speakers:

The Symposium is expected to attract government officials, military leaders, top industry executives, and exhibitors from around the world. For more information, including online registration, preliminary agenda, and exhibitor and sponsorship information, go to www.StrategicSpaceSymposium.org.

About USSTRATCOM
Located at Offutt Air Force Base near Omaha, Neb., U.S. Strategic Command is one of ten unified commands in the Department of Defense. The command headquarters represents all four services, including Department of Defense civilians and contractors, and oversees the command’s operationally focused global strategic mission. USSTRATCOM integrates and coordinates the necessary command and control capability to provide support with the most accurate and timely information for the President, the Secretary of Defense, other National Leadership, and regional combatant commanders. USSTRATCOM combines the synergy of the U.S. legacy nuclear command and control mission with responsibility for space operations; global strike; Defense Department information operations; global missile defense; and global command, control, communications, computers, intelligence, surveillance and reconnaissance (C4ISR), and combating weapons of mass destruction. This dynamic command gives National Leadership a unified resource for greater understanding of specific threats around the world and the means to respond to those threats rapidly.

No federal endorsement of the Space Foundation or any of its members or affiliates is intended or implied.