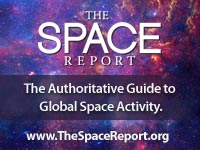 COLORADO SPRINGS, Colo. (Apr. 12, 2010) — Over the past five years, the global space economy has grown almost 40 percent, reflecting increasing commercialization, significant globalization, and expansion of military and civil space programs. Plus, the industry showed remarkable resiliency over the tumultuous past 12 months, demonstrating continued expansion into 2010.

Global Space Economy Defies Economic Turmoil; Hits $261.6 Billion
One of the most significant revelations in The Space Report 2010 is that the global space economy for 2009 reached $261.6 billion in government budgets and commercial revenue; almost 40 percent growth in the five years the Space Foundation has been tracking the space economy.

“While other industries struggled dramatically over the past year, the space industry defied the upheaval and broadened its fields of endeavor,” said Space Foundation Chief Executive Officer Elliot Pulham. “This is due, in large part, to the space industry’s growing array of products and services and its increasing globalization.”

The companies that comprise the Space Foundation Index shared in the general stock market recovery in 2009, returning by mid-March 2010 to the level the Index had been in June 2005. The Index tracks market performance of public companies that derive a significant amount of their revenue from space-related assets and activities.

The Space Report underscores the evolving relationship between government and commercial enterprise, a prominent example being the U.S. Administration’s proposed changes to NASA’s programs announced in February 2010.

This evolution will likely include an increasing role for the private sector through development of commercial space markets and continued space technology spinoff into non-space industries, according to The Space Report. Research performed aboard Earth-orbiting platforms, such as the International Space Station (ISS), and increasing government space activity around the world are two burgeoning sectors of the industry with near-term commercial potential. Military activities in space have already led to the commercialization of satellite timing, positioning, and navigation technologies and satellite imagery, and The Space Report forecasts further advances as additional space capabilities reach the commercial sector.

The Space Report 2010 also chronicles how governments around the world are rethinking longer-term, higher-cost strategic programs. Some countries are flat-lining space funding over the next few years, while others plan to increase spending with the expectation of stimulating their economies with innovation that reaches beyond the space sector.

Budget Data, Launches, Workforce Continue to Reflect Globalization Trend
The continuing, escalating growth of the space economy outside of the U.S. is evident by the addition of data on government space budgets for the European Union, Argentina, Chile, Nigeria, Spain, and South Africa in this year’s edition of The Space Report.

The new edition also reports that launch rates have grown 42 percent from 2005 to 2009, with payloads launched growing 46 percent. Of the 78 launches reported in 2009, less than a third took place in the United States. Russia led with 37 percent, followed by 31 percent for the U.S., 9 percent for Europe, 8 percent for China, 5 percent for the Sea Launch/Land Launch consortium that comprises U.S., Russian, Ukrainian, and Norwegian interests, and less than 4 percent each for Japan, India, North Korea, South Korea and Iran.

Reflecting the diversification and globalization of space, The Space Report 2010 has also greatly expanded coverage of workforce issues, with new sections on the U.S. civil space workforce, the U.S. military space workforce, and on European and Japanese space employment.

It closes with an Outlook section that forecasts significant roles for commercial enterprise and international partnerships, which will require far more flexible policies and regulations to manage proposed public-private partnerships for programs such as lunar exploration, hosted payloads, and commercial spaceflight.

The Space Report 2010 is the result of extensive research by the Space Foundation’s Washington, D.C.-based research and analysis group and a team of independent research organizations, thoroughly examining the state of the space industry. The methodology, which is refined every year, involves identifying, gathering, analyzing, and synthesizing data from publicly available sources, as well as industry publications and reports.

Ordering The Space Report
The Space Report 2010: The Authoritative Guide to Global Space Activity is 140 pages of space facts and figures, punctuated with photographs, charts, and graphs that illustrate the book’s main points. It is available in hard copy, downloadable PDF, and CD-ROM formats. Both the PDF and CD-ROM include hyperlinks that connect to websites for the companies, organizations, reports, and other items of interest mentioned in the text.

Copies may be purchased at the Space Foundation booth at the 26th National Space Symposium and on-line at www.TheSpaceReport.org.

The materials used within and the processes for printing The Space Report 2010 have been certified as meeting the standards and requirements of the Forest Stewardship Council (FSC).

Media Briefing
Space Foundation research and analysis experts will hold a media briefing on The Space Report 2010 at the 26th National Space Symposium on Tuesday, April 13, from 8:00 to 8:30 a.m. in the Space Foundation Media Center, located in the Primrose Room on the second floor of Broadmoor Hall (above the Exhibit Center) at The Broadmoor Hotel in Colorado Springs, Colo. Reporters can also call in to 866-330-1200, passcode 5768000#.  To inquire about the briefing, contact [email protected] or inquire onsite at the Media Center.

More information, including agenda, speakers, and exhibitors, are available at www.NationalSpaceSymposium.org.

About the Space Foundation
The Space Foundation is an international, nonprofit organization and the foremost advocate for all sectors of the space industry – civil, commercial, military and intelligence. Founded in 1983, the Space Foundation is a leader in space awareness activities, educational programs that bring space into the classroom, and major industry events, all in support of its mission “to advance space-related endeavors to inspire, enable, and propel humanity.” Through its Space Certification and Space Technology Hall of Fame®  programs, the Space Foundation recognizes space-based technologies and innovations that have been adapted to improve life on Earth. Headquartered in Colorado Springs, the Space Foundation conducts research and analysis and government affairs activities from its Washington, D.C., office and has field representatives in Houston, Texas, and Cape Canaveral, Fla. For more information, visit www.SpaceFoundation.org. Follow us on Twitter, Facebook, and LinkedIn, and read about the latest space news and Space Foundation activities in Space Watch.