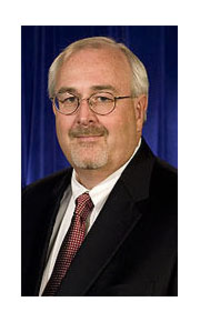 Politicians, civil servants, academics, and private industry came together in Washington, D.C., on June 8 to discuss space applications for weather prediction and management.

Panelists at the 2010 Space Weather Forum addressed the challenge of transitioning satellites from conducting pure research to performing operations, advocating a structured approach rather than today’s ad hoc approach to transition. They highlighted the importance of maintaining the solar wind data collected at the L1 point, which is central to predictions, and is currently wholly dependent on the aging ACE satellite.

Congresswoman Donna Edwards (D-MD) said that space weather is important to people’s lives, but many are unaware of it. She encouraged the space weather community to advocate for the importance of space weather research and operations to ensure it gets adequate funding.

Chris Scolese, NASA associate administrator, talked about the effect the extended solar minimum has had on NASA operations. He said that while NASA is operating near Earth, the space weather “now-casting” technologies basically work, but as astronauts travel further, better forecasts will be needed. NASA needs to have space weather forecasts that are valid for weeks up to years for long-duration space missions.

The United States currently has a number of operational satellites to monitor space weather, including ACE, SOHO, STEREO, SDO, DMSP, GOES, POES, C/NOFS, and GPS-RO/COSMIC. Panelists from the Air Force, National Weather Service, NASA, and NOAA gave an overview of these satellites, and discussed future options for space-based sensors. The United States is also engaging with international partners ESA and its solar orbiter satellite and China and its Kuafu-1 satellite. Space weather is a model for achieving international cooperation. There is already ongoing bilateral cooperation as well as UN programs, including the International Living with a Star (ILWS) program.

Jay Reich, deputy chief of staff U.S. Department of Commerce, said that the space weather community should involve social scientists to help translate the situation for policy-makers. “We need to make clear that there is a problem, but that it can be mitigated.”

The featured speaker at the event was W. Craig Fugate, administrator of the Federal Emergency Management Agency (FEMA). He said that FEMA is engaging with the space weather community to plan emergency response actions, but it is currently unprepared. He noted that space weather effects are unique because they are different than point-specific effects, such as earthquakes or hurricanes. Space weather poses hemispheric challenges.

“In this type of event you can’t mobilize resources from ‘unaffected’ regions to affected ones – you can’t use the tools you’re used to using in other disasters.” He said they are working with the NOAA space weather prediction center to identify how they can use the prediction products to identify triggers for mobilizing a response as well as the actual processes for response.

The final panel during this event focused on the need to prepare for and mitigate space weather effects on critical infrastructure, such as satellite navigation and communication, and the electrical grid, particularly as we head into Solar Maximum. Panelists stressed the difficulty of dealing with high consequence, low frequency events. One panelist suggested the need for a Y2K moment, where people realize this is a coming problem and start to prepare and mitigate.