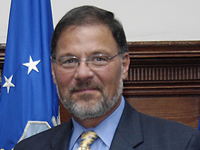 COLORADO SPRINGS, Colo. (Jul. 13, 2010) — The U.S.-based Space Foundation and the UK-based Royal United Services Institute for Defence and Security Studies (RUSI) are co-sponsoring a lecture on July 22 at RUSI’s Whitehall headquarters in London offering ” Perspectives on the Military Use of Space.” The event is being held during the July 19-25 Farnborough International Airshow (FIA) in nearby Hampshire, England, and is open to the public.

The event is free, and open to anyone interested. RUSI membership is not required, but attendees must register via the RUSI website at www.rusi.org/events/ref:E4C212EE0A420C. Doors open at 1700 hrs, with speakers presenting and taking questions 1730 hrs -1830 hrs. Tea and coffee will be available. Finish will be at 1900 hrs prompt.

“The United Kingdom is becoming increasingly reliant on space assets and just recently launched a UK Space Agency,” said Pulham. “This lecture provides an opportunity to underscore the importance of space in military operations, both for nations with a long space heritage and for those that are moving rapidly into the space arena.”

The lecture launches the UK Ministry of Defence’s Space Primer, published by the DCDC, and features information from the 2010 U.S. National Space Policy. It also will provide an analysis on the burgeoning global space economy based upon information in the Space Foundation’s flagship publication, The Space Report 2010: The Authoritative Guide to Global Space Activity.

Involvement in the lecture further expands the Space Foundation’s international outreach at FIA. Other Space Foundation activities during the internationally acclaimed air show include informal and formal meetings with U.S. and European aerospace leaders attending FIA and an official tour of the FIA grounds during “Space Day” on July 21.

About FIA
Held every two years, FIA is a seven-day international aerospace show that demonstrates civilian and military aircraft to potential customers and investors. Like the Paris and Berlin Airshows, FIA is an important event for the aerospace industry, particularly for announcing new developments and orders. FIA is organized by Farnborough International Limited, a subsidiary of the Society of British Aerospace Companies (SBAC). The 2010 event will include five exhibition halls, an outdoor aircraft static display, aircraft demonstrations, and industry meetings and events. The first five days are restricted to trade attendees; the event is open to the public on the weekend.