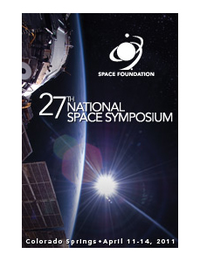 Excitement is building for the 27th National Space Symposium, which is set for April 11-14 at The Broadmoor Hotel in Colorado Springs, Colo. The Space Foundation is offering a Super Early Bird rate with up to $500 in savings for industry attendees who register before Jan. 14, 2011. Exhibit sales are well underway and many corporate co-sponsorship slots are already filled.

Symposium details, including the initial agenda, speakers, the Boeing Exhibit Center, registration, accommodations ,awards, how to exhibit, how to become a corporate sponsor, and how to get the Super Early Bird Rate, can be found at www.NationalSpaceSymposium.org. It also features photos and videos from the 26th National Space Symposium  and provides comprehensive information for media wishing to attend and cover the event.

Extraordinary Agenda
Recognized as the premier gathering of the global space community, the 27th National Space Symposium features forums, panels, presentations, special dinners and luncheons and ample opportunity to hear from and network with the space community’s most influential leaders.

Last year’s event featured more than 100 top-level speakers from around the globe. Early confirmed speakers, panelists and moderators for this year’s event include:

More speakers will be announced as they are confirmed.

The Symposium officially kicks off Monday evening, April 11, with a spectacular Opening Ceremony, sponsored by Northrop Grumman. Then, the Boeing Exhibit Center, which occupies three halls this year, will officially open, followed by a sumptuous reception overlooking the lake and late night fireworks. To secure exhibit space, contact [email protected].

2011 honorees will be announced as they are selected.

Education Events
As an extension of our comprehensive space-based education programs, the Space Foundation will host Teacher Liaisons and selected local Front Range (Colo.) teachers and students for workshops, tours and “Audience with an Astronaut” sessions.