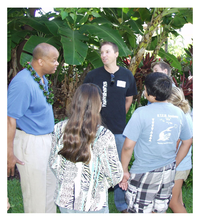 Notable was the enthusiasm for the New Generation Initiatives networking reception for about 55 young space professionals and a half-dozen Space Foundation corporate member senior executive mentors. The networking was so intense that the appetizers were barely touched and participants remained engaged in discussions as late as two hours after the event officially ended.

The Space Foundation hosted 300 middle and high school students for an “Audience with an Astronaut” with CAPT Robert Curbeam, USN (Retired), former deputy director of Flight Crew Operations at Johnson Space Center. A veteran of three spaceflights and seven spacewalks, Curbeam was the first astronaut to perform four spacewalks in a single Shuttle mission.

The students toured the AMOS exhibit center and poster sessions and experimented with hands-on science activities presented by the Air Force Research Labs (AFRL). Each class had a photo taken with Curbeam, and the students enjoyed lunch courtesy of the host hotel, the Wailea Beach Marriott Resort.

Pulham kicked off the final day of the conference with a talk on the state of global space, where he discussed the increasing globalization of space, the need for collaboration and cooperation, and the impact of the United States’ new national space policy. Pulham’s remarks drew heavily upon data found in the Space Foundation’s The Space Report: The Authoritative Guide to Global Space Activity. The annual publication gives a comprehensive overview of the space industry, including financial, technological, environmental and sociological impact.

Devoted to space surveillance, the AMOS Conference presented a cross-section of military, contractor and academic participation in the field of space situational awareness.Attendance was 650, up from 540 the previous year. In addition to AFRL, MEDB and the Wailea Marriott Resort, the event was supported by Lockheed Martin, AGI, Ares Corp. and volunteers from the Maui high-tech community.