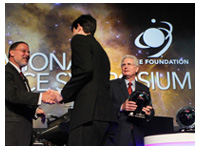 COLORADO SPRINGS, Colo. (Oct. 17, 2011) — The deadline is approaching to submit nominations for three Space Foundation annual awards in the categories of: space exploration; creating a positive public environment for space; and space achievement.

The Space Foundation will award these honors at the 28th National Space Symposium, to be held April 16-19, 2012, at The Broadmoor Hotel in Colorado Springs, Colo.

The Space Achievement Award
The Space Achievement Award is presented annually to an individual or organization for significant contributions in advancing the development or utilization of space. To be eligible, the nominee must have made a major contribution to space, such as releasing a new technology, significantly improving the performance or capabilities of an existing technology, creating new opportunities for space employment or advancement, or significantly advancing or improving space policy within the 2010-2011 timeframe.