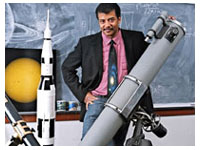 COLORADO SPRINGS, Colo. (Jan. 17, 2012) — Known for his enthusiastic, comprehensible and clever explanations of the mysteries of space, Neil deGrasse Tyson, Ph.D., is the dynamic opening speaker who will deliver the “Symposium Launch Keynote” address for the 28th National Space Symposium, to be held April 16-19, at The Broadmoor Hotel in Colorado Springs, Colo.

Tyson is the Frederick P. Rose Director of New York’s Hayden Planetarium, a best-selling author and the go-to person for newscasters and talk show hosts when a cosmic phenomenon needs explaining. He hosted the PBS program NOVA ScienceNOW for five seasons, and coming in 2013, will host COSMOS, a 13-part TV documentary currently being produced for the FOX network. His latest book is due out Feb. 27, titled Space Chronicles: Facing the Ultimate Frontier.

“Neil Tyson is the intergalactic space poet laureate of our time,” said Elliot Pulham, Space Foundation CEO. “He connects people with the universe with wit, humor and genius that has proven irresistible to his millions of readers, viewers, students, lecture guests and fans the world over. We are delighted to have Neil return to play a major role at the National Space Symposium,” Pulham said.

About Tyson
Tyson, born and raised in New York City, graduated from the Bronx High School of Science and went on to earn his B.A. in physics from Harvard and his Ph.D. in astrophysics from Columbia University. Since then, Tyson has received nine honorary doctorates and was twice appointed by former President George W. Bush to serve on commissions studying the U.S. aerospace industry and U.S. space exploration policy. He currently holds the Frederick P. Rose Directorship of the Hayden Planetarium in New York City, the first person to do so.

During Tyson’s impressive career in space public outreach he has authored ten books, including: Death By Black Hole and Other Cosmic Quandaries, which was a New York Times bestseller; The Pluto Files: The Rise and Fall of America’s Favorite Planet, chronicling his experience at the center of the controversy over Pluto’s planetary status, and which was also made into a PBS documentary of the same name; and his memoir The Sky is Not the Limit: Adventures of an Urban Astrophysicist. His latest book,Space Chronicles, is a candid, honest and often humorous look at what it will take for space to reclaim its rightful place in the hearts and minds of the nation.

About the 28th National Space Symposium
The Symposium features more than 100 speakers from every facet of the global space community, the expansive Ball Aerospace Exhibit Center with a new Pavilion this year, a fabulous opening ceremony featuring the Colorado Springs Philharmonic, presentation of prestigious Space Foundation awards, the popular Space Technology Hall of Fame® dinner, and special programs for educators, students and young space professionals.

Secure online registration for both the Symposium and for Cyber 1.2 can be found at www.NationalSpaceSymposium.org, which includes a live chat tab for customer service questions.