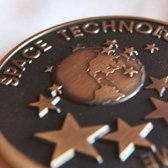 COLORADO SPRINGS, Colo. (March 16, 2012) — Two diverse technologies that have origins in space are being inducted into the Space Foundation’s Space Technology Hall of Fame® next month. Events honoring the 2012 honorees, which include the first international inductee, will be held on April 19 at The Broadmoor Hotel in Colorado Springs, Colo.

Low-density, light-weight flexible aerogel insulating material and a high-resolution optical sensing system called FireWatch that detects forest fires before they can cause serious environmental damage are the two technologies being inducted.

The Space Foundation established the Space Technology Hall of Fame in 1988 to increase public awareness of the benefits that result from space exploration programs and to encourage further innovation.

About Flexible Aerogel
Flexible aerogels were originally developed to serve as a barrier to the extreme temperatures that occur during rocket launches and that affect spacecraft as they are exposed to both high heat and severe cold. Because the initial silica aerogels were fragile and expensive, NASA contracted with James Fesmire, senior principal investigator of the Cryogenics Test Laboratory at Kennedy Space Center, and the startup company Aspen Systems Inc. to produce affordable and easy-to-use aerogel composite blankets for space applications.

Aspen Aerogels continued its development of the product to produce three variations – Cryogel, Pyrogel and Spaceloft – that are now used in industrial, construction, refrigeration, automotive, medical and commercial applications. Examples include:

The leading provider in the United States, Aspen Aerogels produces nearly 20 million square feet of the material per year for extreme environments on Earth and in space.

About FireWatch
DLR and the private firm IQ Wireless took technology developed by DLR to analyze gases and particles in space and created a terrestrial detection tool known as FireWatch that uses high-resolution optical sensors installed on towers or masts that connect to a remote central office to monitor forests and detect potential fires.

With sensors that can distinguish between more than 16,000 scales of grey, the system can spot developing fires in virtually any weather, day or night, resulting in a detection rate of more than 90 percent. FireWatch image processing software analyzes the motion, structure and brightness of smoke plumes and automatically alerts monitoring personnel within six minutes during daylight and within 12 minutes during the night. Monitoring personnel receive target images and coordinates to determine and alert the appropriate response resources.

Using networks of high-resolution cameras that can each monitor hundreds of square miles of forest, FireWatch now protects more than seven million acres of forests around the world from Europe and Australia to Mexico.

Three Events to Honor Inductees
Three separate events on April 19 will honor the various organizations and individuals who successfully commercialized the two space technologies, including:

All are part of the Space Foundation’s 28th National Space Symposium, April 16-19 at The Broadmoor Hotel.

About Nomination and Judging
Each year, the Space Technology Hall of Fame solicits nominations from the industry and the public. After a thorough review process that establishes whether the technologies did, indeed, have their origins in space exploration and/or research, the qualifying technologies are reviewed and ranked by a distinguished panel of judges that included:

“The judges had many high-caliber nominations to consider for 2012, some of which were repeat nominations from previous years,” said Space Foundation Director – Space Awareness Kevin Cook. “These inductees are extraordinary examples of how space research and development can, eventually, make our lives on Earth safer, more comfortable and more environmentally sustainable.

“The induction of FireWatch underscores the increasing globalization of space,” Cook continued. “As our first purely international honoree, this technology shows how other nations are developing and deploying space technologies.”

Register to attend the 28th National Space Symposium at http://www.nationalspacesymposium.org/register.