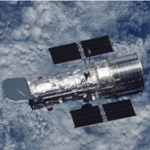 Saving Hubble, a new independent documentary feature film that tells the story of America’s fight to save the Hubble Space Telescope from an untimely death in 2004, will be screened for participants of the Space Foundation’s 28th National Space Symposium at noon on April 17 in the Broadmoor Theater at The Broadmoor Hotel in Colorado Springs, Colo. The free showing of the 68-minute-long film will include a complimentary lunch for attendees.

Hosted by Saving Hubble producer David Gaynes, the screening is part of The Hubble Roadshow, an ambitious distribution and outreach plan aimed at promoting space exploration and scientific achievement through a traveling show featuring screenings of the movie, presentations by astronauts, engineers and astronomers, additional informal science STEM programming, music and food. Tuesday’s screening is sponsored by the American Astronomical Society (AAS).

The film simultaneously examines the Hubble Space Telescope’s history, legacy and role in American culture, detailing the grassroots public response to NASA’s plans to cancel the telescope’s final servicing mission. The public outcry overshadowed the debate about the future of NASA’s human spaceflight program, which was going on during the same time. As a result of the grassroots lobbying efforts, NASA reversed its earlier decision in 2006, electing to carrying out the servicing mission, which the STS-125 Space Shuttle crew carried out successfully in 2009. The film features interviews with scientists, engineers, astronauts, journalists and a broad crosssection of the public, all talking about what the Hubble Space Telescope means to them. Unlike other programs about Hubble, Saving Hubble focuses on public interest in the program rather than its scientific discoveries.

The screening is one of many activities available to attendees of the National Space Symposium, the premier gathering of the global space community. Unlike many Symposium events, it is also open to the public.