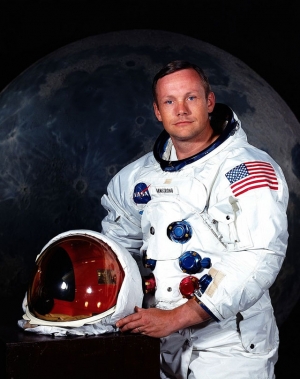 The Space Foundation mourns the death of astronaut Neil Armstrong, the first human to walk on the Moon. Armstrong died on Aug. 25 at the age of 82 following complications from heart-bypass surgery he underwent earlier this month, his family said in a statement.

“Neil Armstrong was a humble, soft-spoken hero who never forgot that it was the will of the nation and the tireless work of thousands of scientists and engineers that enabled him to take that famous ‘giant leap’ for mankind,” said Space Foundation Chief Executive Officer Elliot H. Pulham. “Avoiding the limelight, Armstrong spent most of his post-Apollo career helping to solve business and engineering challenges while quietly working on campuses and behind the scenes to inspire new generations of explorers.

“Armstrong’s quiet resolve and unyielding belief in the importance of exploration will be missed by a grateful nation,” Pulham continued. “In an age when Hollywood and professional sports manufacture so-called ‘heroes,’ Armstrong exemplified the right stuff. He was the real deal. Particularly in this age of timid exploration goals and paltry NASA budgets, Armstrong looms as a larger-than-life reminder of what our nation was once capable of.”

A Life Devoted to Space

Born in Wapakoneta, Ohio, Armstrong joined the National Advisory Committee for Aeronautics (NACA) in 1955 after serving as a naval aviator from 1949 to 1952. His first assignment was with the NACA Lewis Research Center (now NASA Glenn) in Cleveland, Ohio. Over the next 17 years, he was an engineer, test pilot, astronaut and administrator for NACA and its successor agency, the National Aeronautics and Space Administration (NASA).

As a research pilot at NASA’s Flight Research Center, Edwards, Calif., Armstrong was a project pilot on many pioneering high-speed aircraft, including the well-known, 4,000-mph X-15. He flew more than 200 different models of aircraft, including jets, rockets, helicopters and gliders.

Armstrong transferred to astronaut status in 1962 and was assigned as command pilot for the Gemini 8 mission, which launched on March 16, 1966. On that mission, he performed the first successful docking of two vehicles in space. 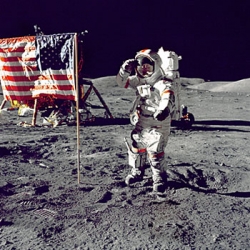 As spacecraft commander for Apollo 11, the first manned lunar landing mission, Armstrong gained the distinction of being the first human to land a craft on the Moon and first to step on its surface. His statement as he stepped onto the lunar surface, “that’s one small step for (a) man, one giant leap for mankind,” remains one of the best-known quotes of modern times.

Armstrong subsequently held the position of deputy associate administrator for aeronautics at NASA Headquarters in Washington, D.C., where he was responsible for coordination and management of NASA research and technology work related to aeronautics.

From 1971-79, he was a professor of aerospace engineering at the University of Cincinnati and, from 1982-1992, he was chairman of Computing Technologies for Aviation, Inc., Charlottesville, Va.

Armstrong held a Bachelor of Science Degree in Aeronautical Engineering from Purdue University, a Master of Science in Aerospace Engineering from the University of Southern California and honorary doctorates from a number of universities. He was a Fellow of the Society of Experimental Test Pilots and the Royal Aeronautical Society; and an Honorary Fellow of the American Institute of Aeronautics and Astronautics, and the International Astronautics Federation. He was a member of the National Academy of Engineering and the Academy of the Kingdom of Morocco. He served as a member of the National Commission on Space (1985-1986), as vice chairman of the Presidential Commission on the Space Shuttle Challenger Accident (1986), and as chairman of the Presidential Advisory Committee for the Peace Corps (1971-1973).