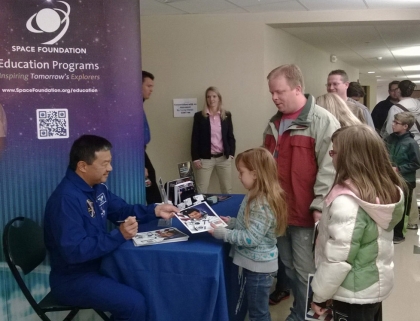 The Space Foundation is a proud World Space Week Partner Organization. Initiated by the United Nations General Assembly in 1999, World Space Week is an international celebration of space, and is held each year Oct. 4-10.

On Saturday, Oct. 5, Chiao’s presentation was part of the public Colorado Springs Science Festival at the University of Colorado at Colorado Springs. Chiao told the families who gathered for his talk about his childhood interest in science and how that interest led to his career as an astronaut.

In addition, he flew as Flight Engineer 1 aboard Soyuz TMA-5 to the International Space Station (ISS), where he served as commander and NASA science officer for Expedition 10. He lived on the ISS for six and half months. Chiao received the NASA Distinguished Service Medal in 2004.