July 1 is the Deadline to Nominate A Colorado Space Hero

Colorado is “home” to more astronauts than any other state in the U.S., with at least 100 NASA astronauts who were born, educated, worked or resided in the state. It is also home to some of the world’s leading aerospace executives, engineers and visionaries who led the development of Colorado’s space economy to become of the most important in the nation and world.

To honor those Colorado space leaders, the Space Foundation has created the Colorado Space Heroes Hall of Fame. This new award recognizes outstanding individuals who have distinguished themselves through lifetime contributions to the welfare or betterment of humankind through the exploration, development and utilization of space, or the use of space technology, information, themes or resources in academic, cultural, industrial or other pursuits of broad benefit to humanity.

Anyone may submit a nomination for a Colorado space hero whose personal or professional contributions in space span a decade or more, and have lived in Colorado. Nominees may also be awarded posthumously.

The deadline to submit a nomination is July 1, 2016. See all of the eligibility requirements here. Nominations will be reviewed by a volunteer selection committee.

A gala in Denver at Mile High Station during World Space Week on Oct. 7, 2016, will publicly celebrate the first honorees to be inducted into the Colorado Space Heroes Hall of Fame. See ticket information and sponsorship availability here.

The Colorado Space Heroes Hall of Fame will live virtually on the internet, and may later find a permanent physical presence at the Space Foundation Discovery Center space museum and education center in Colorado Springs.

To Submit a Nomination
Submit a nomination in the form of a letter, not to exceed one page, by July 1, 2016, addressed to: 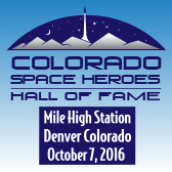 Save the Date
Plan now to attend the first Colorado Space Heroes Hall of Fame Gala, to be held Friday, Oct. 7, at Mile High Station, Denver.