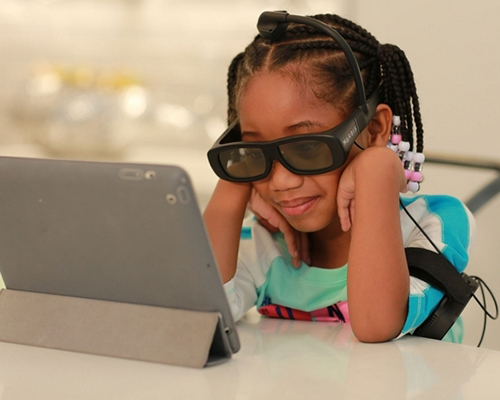 COLORADO SPRINGS, Colo. (Nov. 14, 2019) — Much of the technology we use daily was originally developed for space exploration and later adapted to benefit our lives on Earth. The Space Foundation’s Space Certiﬁcation Program awards a “seal of approval” to companies whose products and services can demonstrate a viable link to the space program, such as home insulation, air, and water filtration systems, plant nutrition, robotics, and medical technologies. The seal can also be awarded to companies that promote or create interest in space-related topics, such as series of children’s books, traveling planetariums, high-school curriculum, and space-themed music.

The most recent company to become a Space Certification partner for its space-based technology is Narbis. This Pennsylvania-based company developed Narbis smart glasses to aid learning and concentration.

Narbis uses a NASA-developed algorithm to improve attention: NASA Patent #5,377,100, invented by NASA Senior Research Scientist Dr. Alan Pope, who is also on the Narbis advisory board and ongoing consultant for Narbis.

The NASA-patented algorithm utilized by Narbis smart glasses employs three sensors — one behind each ear and one at the top of the head ­-— to track relaxation, distraction, and focus. When the wearer is reading, working on a computer, or doing homework, and the glasses detect that attention is waning, the glasses alert the user by changing tint so they can get back on task.

See all of the Space Certified technologies on the Space Foundation website at www.SpaceFoundation.org

The parent company, Domenic Greco Ventures, Corp., was named after Narbis founder Devon Greco’s father, Dr. Domenic Greco, a leading clinical psychologist. Sadly, Dr. Greco was diagnosed with ALS in 2009. Alongside his youngest son, Devon, he continued to work throughout his illness on innovation in the area of easy-to-use neurofeedback systems for individuals. Narbis was conceived by Devon before Dr. Greco’s premature death in 2013. He continues to be an inspiration to the work and innovation behind Narbis. Learn more by visiting https://narbis.com/