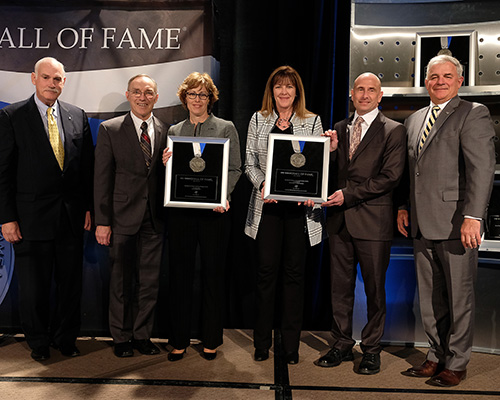 COLORADO SPRINGS, Colo. (Feb. 18, 2020) — The Space Foundation’s 36th Space Symposium will celebrate the induction into the Space Technology Hall of Fame® of three innovations developed for space that now improve life on Earth.

The induction ceremonies will be part of the 36th Space Symposium, to be held March 30 – April 2 at The Broadmoor in Colorado Springs, Colo., USA.

About Audio Conference Bridge Technology (Compunetix)
Compunetix was founded in 1968 as a small contract-services technology provider. In 1987, they won a contract to deliver a digital voice switching system for NASA that would accommodate the agency’s wide range of communication needs.

At the time, NASA’s communication network was an analog system requiring the manual switching of cables to relay communication lines. Compunetix integrated their patented algorithm into the NASA infrastructure, developing two new digital systems for voice switching and voice distribution — allowing software-enabled switching, and eliminating the need for manual switching.

By 1992, the new 4,000-port system had been installed, and after testing, it entirely replaced NASA’s previous communications system. Following that success, Compunetix developed a commercial version of the technology, and today, the Compunetix bridge hardware is used by nearly every major conference call provider.

About Apollo 70 Cardiac Care Monitoring System (Spacelabs Healthcare)
Founded in 1958, Spacelabs Healthcare approached NASA with their concept of a real-time system for monitoring astronauts’ vital signs while in orbit, including a telemetry system to simultaneously transmit the data back to Earth.

From 1962 to 1967, Spacelabs was awarded NASA and Air Force contracts to develop this system, which was first used by NASA during the 1965 Gemini IV mission when Ed White wore it during his first-ever American spacewalk. Likewise, when Neil Armstrong was the first man to walk on the Moon in 1969, he was wearing Spacelabs health monitors and telemetry.

After the system was successfully used in space, Spacelabs developed a similar system that could be used commercially by hospitals to track patient health and recovery. Today, Spacelabs Healthcare produces a whole line of healthcare monitoring and telemetry systems that are used in hospitals all over the world.

About Traveling-Wave Tube Amplifier (L3 Electron Devices)
First developed in the 1930s, Traveling-Wave Tube Amplifiers (TWTAs) were designed to amplify radio frequency signals. It was in the early 1960s that NASA and L3 teamed up to evolve the technology so it would meet the transmission needs of space missions. The first TWTA flew on a satellite in 1962, and they have been a part of every science spacecraft NASA has launched since 1972.

L3 is the only provider of space certified TWTAs in the United States, and they have been continually working with NASA to improve their performance over the past 50 years. These improvements have led to increased transmission speeds and power capabilities, which are crucial to the success of NASA’s ongoing space exploration missions.

Today, commercial companies also use the ever-expanding capabilities of TWTAs to offer more benefits to consumers, which has led to improvements in mobile voice and data services, as well as broadband internet service.

About the Judges
The distinguished panel of judges who selected the 2020 Space Technology Hall of Fame® inductees comprised:

Nominate Technologies for 2021 Induction in the Space Technology Hall of Fame
The deadline to submit nominations for induction in 2021 will be Aug. 14, 2020. Anyone may submit a nomination of a technology that was developed anywhere in the world for use in space, and then modified or adapted for use on Earth. Nomination information, including the online nomination form, is available at www.SpaceTechHallofFame.org.