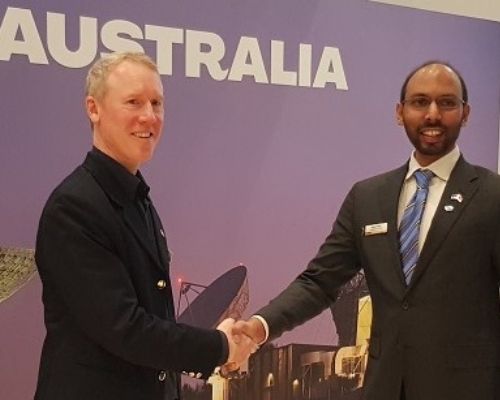 COLORADO SPRINGS, Colorado, USA, 5 April 2022 –LatConnect 60 (LC60), an Earth observation and data fusion company based in Perth, Australia, has signed an agreement to work with Gilmour Space Technologies in Queensland to build and launch the first microsatellite in a planned high-resolution hyperspectral imaging constellation. The smart satellites will be placed in 30-degree inclined orbits for frequent revisit data capture over the Earth’s equatorial and mid-latitude regions.

Executives from the Australian companies announced the HyperSight 60 constellation agreement jointly today at the 37th Space Symposium in Colorado Springs, Colo., an annual meeting that brings together space leaders from around the world.

“HyperSight 60 will deliver geospatial insights for mid-latitude areas at a level of detail and frequency not possible with other commercial remote sensing systems,” said Venkat Pillay, LC60 CEO and Founder. “The addition of Gilmour Space to the LC60 team contributes significantly to the future success of our ambitious plans.”

Under the agreement, Gilmour Space will develop the first 100-kilogram HyperSight 60 satellite on its G-class satellite bus (G-Sat), which will be launched on Gilmour’s Eris rocket from the Bowen Orbital Spaceport in Queensland, ideally located to place satellites into equatorial and mid inclined orbits. The microsatellite and subsequent constellation will be owned and operated by LC60.

“This agreement would be our second G-class satellite mission on Eris, and we’re excited to be working with the pioneering team at LC60 to bring this significant capability to market,” said Gilmour Space CEO, Adam Gilmour.

The first HyperSight 60 microsatellite is planned for launch in Q4 2024. Once the entire eight-satellite constellation is operational, an hourly revisit rate will be possible at mid-latitude locations between 30 degrees north and south in Australia, Asia, South America, and Africa. This revisit, combined with the spectral bands collected in high- and medium-spatial resolution, will deliver timely information-rich insights for Agriculture, Forestry, Environmental, Mineral/Oil & Gas, Climate Change, Maritime, and Defence applications.

Established in 2019, LC60 currently owns exclusive rights to 80-centimeter imagery captured over Australia, with global access from a high-resolution multispectral satellite. The Perth-based company has leveraged this imagery along with other geospatial data sets to develop advanced artificial intelligence and machine learning-based data fusion and analysis algorithms for a variety of applications. Most notably, LC60 is now delivering insights to assist Southeast Asian palm and rubber plantations in improving productivity while enhancing environmental sustainability.

LC60 is also focused on designing ‘smart’ satellites equipped with onboard AI-based computing technology. For the HyperSight 60 constellation, this will enable ‘tip-and-cue’ capabilities among satellites within the constellation and allow pre-processing of data, including radiometric and geometric correction, to occur in orbit before the data is downlinked to the ground.

“For HyperSight 60 and other planned LC60 constellations, our unique approach to onboard AI sensors, combined with advanced data fusion on the ground, will fill gaps in the insights that can be gleaned from current remote sensing systems,” said Pillay.

LatConnect 60 (LC60) is an Earth Observation company that collects satellite imagery data and fuses it with other forms of data for vital insights. Insights are delivered as a service through customized platforms to empower government and commercial clients. LC60 provides Space-enabled solutions, consisting of software platforms, data analytics algorithms and systems to aggregate sensors and data both on-ground and in-orbit. Its business strategy is aligned with current and future space Earth Observation and IoT markets that are advancing at a rapid pace.

LC60 has exclusive access to a high-resolution satellite and is developing its own tailored EO constellation with novel sensors related to hyperspectral and thermal infrared to meet growing market demands for greater insights in agriculture, defence and maritime strategic awareness.

Gilmour Space is a venture-backed launch services company in Queensland, Australia that is developing sovereign small satellite capability and launch vehicles powered by new propulsion technologies. The company recognises that access to space is a bottleneck, and that launch costs and availability are two of the biggest hurdles for smallsat customers who are developing, testing and deploying New Space technologies. The Gilmour Eris orbital rocket will offer more affordable, reliable and dedicated launches into Low Earth Orbits (LEO) from 2022.

« Amazon Secures Up to 83 Launches from Arianespace, Blue Origin, and United Launch Alliance for Project Kuiper