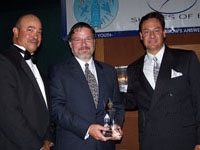 In addition to the Space Foundation, two other organizations and three individuals were recognized for their contributions and accomplishments. Jeppesen and Raytheon Company also received Corporate Leadership Awards. The Ed Dwight, Jr. Award was presented jointly to Lt. Victor Glover, USN and Barrington Irving for their outstanding accomplishments, respectively, as a naval aviator and as the youngest pilot to fly solo around the world. The teacher of the year honor was presented to Alan Godman, an educator at Legacy High School in Broomfield, Colo.

The Space Foundation has worked with Shades of Blue on a number of projects including providing instruction on introductory theory to microgravity to middle and high school students at their “Ace Camp.” More information about Shades of Blue can be found at www.ourshadesofblue.org.