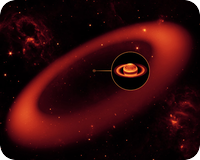 This artist’s conception depicts a massive, yet nearly invisible, ring around Saturn, recently discovered by NASA’s Spitzer Space Telescope. It is made up of ice and dust particles and is the largest of Saturn’s many rings. According to NASA, it would take one billion Earths stacked together to fill the ring.

Announced Oct. 7 by Anne Verbiscer and Michael Skrutskie of the University of Virginia, and Douglas P. Hamilton of the University of Maryland, the discovery is significant because it helps solve a mystery surrounding one of Saturn’s moons, Iapetus, which is extremely bright on one side and dark on the other. It is now understood that particles from the ring darken one side of Iapetus.

Spitzer was launched in 2003 and is 66 million miles from Earth, in orbit around the sun. Its multiband imaging photometer was built by Ball Aerospace Corporation, Boulder, Colo., and the University of Arizona, Tucson.