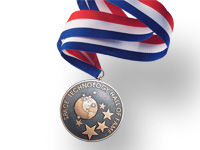 Lenses that protect human eyes from solar radiation and digital fly-by-wire technology that significantly improves the fuel efficiency, reliability, and cost of modern aircraft have been selected for induction into the Space Technology Hall of Fame®, which honors outstanding technologies developed for use in space that have been adapted to improve life on Earth.

Eagle Eyes Optics and NASA’s Jet Propulsion Laboratory will be inducted for radiation-filtering technology now used in sunglasses, and Venture Technology Inc. will receive a commendation for its early work on the optical technology.

NASA’s Dryden Flight Research Center, Draper Laboratory, The Boeing Company, and Airbus will be inducted for developing a technology that uses electronic pulses instead of mechanical or hydraulic linkages to control the actuators for the ailerons, flaps, and other control surfaces of an aircraft.

The honorees will be recognized at a private induction ceremony and at the Space Technology Hall of Fame® Dinner on April 15 at the close of the Space Foundation’s 26th National Space Symposium at The Broadmoor Hotel in Colorado Springs, Colo. The private induction ceremony is sponsored by Cisco Systems, Inc., and the Space Technology Hall of Fame® Dinner, featuring speaker Leonard Nimoy, is sponsored by Lockheed Martin.

About Eagle Eyes Technology
In the 1960s, NASA’s Jet Propulsion Laboratory began looking for a method to protect human eyesight from the harmful effects of solar radiation in space, especially ultraviolet and blue-light rays that are known to contribute to cataract and age-related macular degeneration.

Researchers learned that the eyes of birds-of-prey contain oil droplets that filter out harmful radiation and permit only specific wavelengths of light to enter. This natural filtering process provides them with extreme visual clarity – even at great distances. The researchers replicated this natural system and created the first transparent welding curtain to filter out harmful light and protect human eyesight in hazardous environments.

The new technology was soon applied to sunglasses and introduced to the public under the Sun Tiger name, known today as Eagle Eyes Optics. These lenses absorb 99+ percent of all photo wavelengths considered hazardous to human eye tissue – including ultraviolet and blue-light up to 475 nanometers in the wavelength spectrum, the cut-off point at which visible light is allowed to transmit through the lens. This range is the most beneficial to the human eye for protection, for increased visual perception and contrast, and for reduced chromatic aberration.

“Eagle Eyes products are recognized around the world for their protective and vision-enhancing capabilities,” said Space Foundation Director – Space Awareness Programs Kevin Cook, who administers the Space Technology Hall of Fame® for the Space Foundation. “They are another excellent example of how space technology benefits life on Earth.”

Eagle Eyes, based in Calabasas, Calif., markets a broad range of sunglasses and protective eyewear. The Jet Propulsion Laboratory, which did the major initial research, is based in Pasadena, Calif., and Venture Technology is based in Santa Rosa, Calif.

About Digital Fly-By-Wire Technology
In the late 1960s, engineers at NASA Flight Research Center (now Dryden Flight Research Center) proposed replacing bulky mechanical flight-control systems on aircraft with much lighter-weight and more reliable fly-by-wire technology. The engineers had been exploring ways to apply knowledge gained from their work in support of the Apollo program.

They initially envisioned controlling aircraft using analog computers – the standard of the era; however, astronaut Neil Armstrong, who had successfully flown to the moon using digital technology developed for the Apollo program, encouraged Dryden to explore a digital option. Dryden teamed up with Draper Laboratory, which had worked with NASA on the Apollo program, to develop a digital fly-by-wire (DFBW) solution using the specialized hardware and software developed for Apollo.

Proven performance and solid cooperation between NASA and industry translated into use of DFBW systems in new aircraft design in a remarkably short time. Airbus and Boeing developed the first commercial airliners using the new DFBW technology.

DFBW-equipped aircraft are more fuel efficient because they maintain constant speed and altitude over long distances. Without bulky hydraulics, cables, rods and pulleys, they have greater payload capacity and greater range. The electronic systems require less maintenance and, because there are fewer mechanical parts to fail, the airplanes are far more reliable. DFBW systems are easier to install and troubleshoot, which makes assembly and maintenance more efficient. And, the reduced vulnerability to battle damage makes DFBW ideal for military aircraft.

“DFBW technology is a quantum jump in aircraft design and performance,” said Cook. “Safer and more efficient aircraft around the globe represent a major aeronautics success, as well as another example of how technology developed for space exploration directly benefits life on Earth.”

The NASA Dryden Flight Research Center is in Lancaster, Calif., Draper Laboratory is in Cambridge, Mass., The Boeing Company headquarters are in Chicago, Ill., and Airbus is headquartered in Toulouse, France.

About the Award
The Space Technology Hall of Fame® was created in 1988 by the Space Foundation, in cooperation with NASA, to increase public awareness of the benefits resulting from space exploration programs and to encourage further innovation. To date, the Space Foundation has inducted 61 technologies as well as honoring the organizations and individuals who transformed space technology into commercial products that improve the quality of life for all humanity.