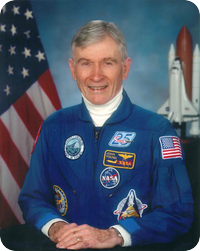 The Space Foundation Board of Directors has selected former Gemini, Apollo, and Space Shuttle Astronaut CAPT John Young, USN (Retired), for the Foundation’s highest honor – the General James E. Hill Lifetime Space Achievement Award. The award will be presented at a special luncheon event on Wednesday, April 14, 2010, during the 26th National Space Symposium at The Broadmoor Hotel in Colorado Springs, Colo. The luncheon is sponsored by Raytheon.

“Each one of John Young’s major accomplishments would easily qualify him for lifetime space achievement recognition, but the breadth and depth of his experiences truly set him apart,” said Space Foundation Chief Executive Officer Elliot Pulham. “CAPT Young’s career, in many ways, shaped the early U.S. Space program – the heyday of space exploration and national support for space.”

“Given the parallels between his efforts and those of the Space Foundation to advance exploration, development, and utilization of space, it is especially gratifying that CAPT Young has been selected as our 2010 honoree,” said Space Foundation Board Chairman Dr. William Ballhaus, Jr.

About Young
Born in San Francisco and raised in Orlando, Fla., Young earned a bachelor of science degree in aeronautical engineering with highest honors from the Georgia Institute of Technology in 1952, after which he entered the United States Navy. He served as Fire Control Officer on the destroyer USS Laws until June 1953 and completed a tour in the Korean Seas. He then became a fighter pilot, and in 1959, a test pilot.

Young joined NASA in 1962 and flew, with Virgil “Gus” Grissom, the first manned Gemini flight. He was commander of the Gemini 10 mission, which performed the first dual rendezvous with two separate Agena target vehicles.

On the Apollo 10 mission – the second manned flight to the Moon – Young flew the command module solo while crewmates Thomas Stafford and Eugene Cernan orbited the Moon in the lunar module. As commander of Apollo 16, Young walked on the Moon and set a speed record with the lunar rover.

Young also served on five backup space flight crews: backup pilot in Gemini 6, backup command module pilot for the second Apollo mission and for Apollo 7, and backup spacecraft commander for Apollo 13 and Apollo 17. Young had a major role in rescuing the Apollo 13 crew as a member of the team that developed procedures to stretch consumables and reactivate the command module systems for re-entry.

Young retired from the Navy in September 1976, after completing 25 years of active military service; he retired from NASA in December 2004, at the age of 74, with 42 years of service.

Among Young’s many awards are the Congressional Space Medal of Honor in 1981, the NASA Outstanding Leadership Medal in 1992, the American Astronautical Society Space Flight Award in 1993, the NASA Outstanding Achievement Medal in 1994, and the National Space Trophy in 2000. Young put more than 15,000 hours into training and logged more than 15,275 hours in props, jets, helicopters, and rocket jets, more than 9,200 hours in T-38s, and 835 hours in his six space flights.

He holds six honorary degrees and has a highway in central Florida named after him. He is also the subject of two paintings, one by Norman Rockwell and the other by Henry Casselli, currently on display at the Colorado Springs Fine Arts Center, part of the Smithsonian Institution Traveling Exhibition  NASA | ART: 50 Years of Exploration.

About the Award
The Space Foundation annually presents the Hill award in honor of its late, long-time chairman, Gen James E. Hill, USAF (Retired). The award recognizes outstanding individuals who have distinguished themselves through lifetime contributions to the welfare or betterment of humankind through exploration, development, and use of space, or through use of space technology, information, themes, or resources in academic, cultural, industrial, or other pursuits of broad benefit to humanity.

“We set exacting criteria, and solicit nominations from space leaders around the world. It is our highest honor and can only be conferred by unanimous vote of our board of directors,” said Ballhaus. “Recipients of the Hill Award embody the ideals of the Space Foundation and are recognized for a lifetime of accomplishment.”