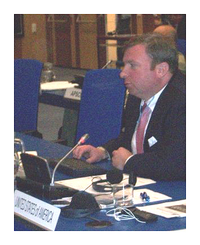 Space Foundation Vice President – Washington Operations Brendan Curry participated in last month’s meeting of the United Nations Committee on the Peaceful Uses of Outer Space (UNCOPUOS) June 8-13 in Vienna, Austria. Established in 1959, UNCOPUOS is one of the largest committees in the United Nations. Members include 69 nations (member states). In addition, many intergovernmental and non-governmental organizations (including the Space Foundation) have observer status with UNCOPUOS and its subcommittees.

Developing Nations Demonstrate Practical Earth-Focused Uses of Space
According to Curry, “It was interesting that developing nations all stressed the importance of space applications for disaster management, land use, food production, telemedicine, and so forth. Many nations have quickly become very dependent on space. These nations have scarce resources, but yet they are still finding ways to acquire space assets and capabilities,” he said. “They are pragmatic about how they spend their money for space.”

Curry said that Ecuador, Indonesia, and Turkey all stated that they plan to have official space agencies established by the end of the calendar year. He also said that the developing nations praised the UN Platform for Space-Based Information for Disaster Management and Emergency Response (UN-SPIDER). Austria is heavily investing in UN-SPIDER, as well.

The concept of a “voluntary code of conduct” for space was frequently a discussion topic, and UN-OOSA advocated developing a “space aid” fund that help poor nations access space assets and data to help cope with natural disasters.

Space Foundation Networks with Space Leaders
The Space Foundation and the U.S. government co-hosted a reception following the introduction of a GPS satellite model into the permanent space exhibit at the UN. Curry also attended a number of events where he networked with space leaders from around the world.