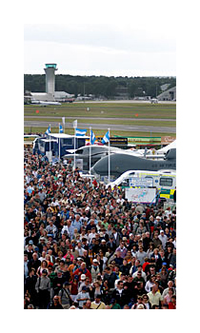 Later this month the Space Foundation will further expand its international outreach with a series of events held in conjunction with the Farnborough International Airshow (FIA) July 19-25 in Hampshire, England:

Held every two years, FIA is a seven-day international aerospace show that demonstrates civilian and military aircraft to potential customers and investors. Like the Paris Air Show and ILA, FIA is an important event for the aerospace industry, particularly for announcing new developments and orders. FIA is organized by Farnborough International Limited, a subsidiary of the Society of British Aerospace Companies (SBAC).

The 2010 event  will include five exhibition halls, an outdoor aircraft static display, aircraft demonstrations, and industry meetings and events. The first five days are restricted to trade attendees; the event is open to the public on the weekend. FIA 2008 broke records with US$88.7 billion worth of orders announced,165 aircraft in static displays and flying displays, and 153,000 visitors. More than 1,300 exhibitors are expected in 2010.

FIA 2010 will include a number of new networking initiatives, including as a themed conference and seminar program, a ‘Meet Your Buyer’ event , a day dedicated to International Futures for Youth, an enhanced unmanned aerial vehicle (UAV) presence, and a dedicated ‘Space Zone.”